Welcome to another edition of Tuesday To-Do,
a link-up hosted by Texas Quilt Gal for us quilters
who like a little extra motivation to get things done! 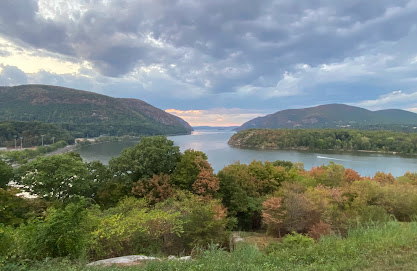 We've been travelling again!
It was sooo good to be back in the Hudson Valley
and up at West Point this past weekend!
We enjoyed what might be our best visit yet but
more on that later.  First let's see what I got done!
Er...maybe it goes without saying that being gone for
4 days means I didn't get much done at all but
I gave it my best shot and that's all that counts.
1) Link my Etsy shop on blog
Done.
But it requires viewing the web version.  Tech things
are just BO-RING but one day I'll find the time to get
things better sorted.
Right now:  "Ain't nobody got time for that!"
2) Work on West Point Quilt
Very little but I'm trying! 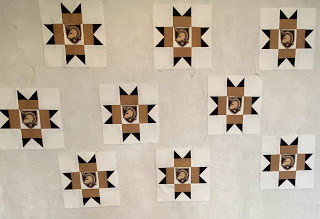 3) Start quilting Once in a Blue Pumpkin
Not done. 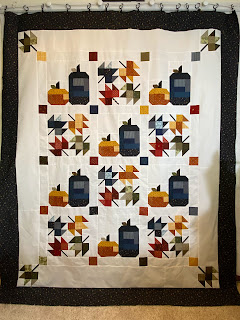 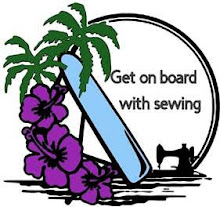 I did, but more to do.  Thursday is the first day
and my day to host. I have a couple small
but fun giveaways so you'll want to drop by!
Now to share some West Point bling! 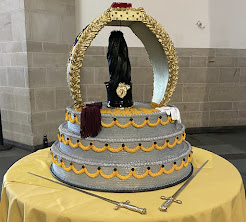 A ring, a parade hat, sash, gloves, sword...
the Class of '23 is getting ready to graduate!
(I'm pressed for time here so this likely
won't be anything eloquent but here goes!) 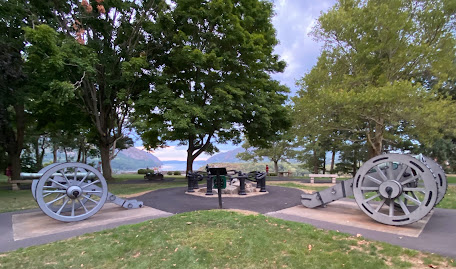 Above, a portion of the chain stretched across the Hudson
during the Revolutionary War.  West Point displays many
of the cannons used in all of our wars--as trophies.
Some of you have kept up on on IG but it was
Ring Weekend at the US Military Academy.
I don't think I'd be wrong if I were to say when it comes
to tradition, West Point (founded in 1802) is at the top
of the list, or darned close, in this country
The class ring actually originated at West Point back
in 1835 so you can imagine why the celebration of it
spans a whole weekend.
Each year, rings of past graduates are donated by
their family and collected in a very specific crucible
at the Ring Melt ceremony held back in January.
The addition of the gold from these rings to those of the
of the graduating class is just one more way West Point
signifies the unity and commitment to the Long Gray Line.
If I remember correctly, there were 13 rings donated this
year, the oldest one dating to 1902. 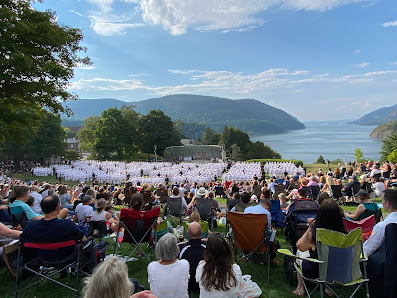 With the great view of the Hudson as a backdrop,
we watched the cadets receive their rings on Friday. 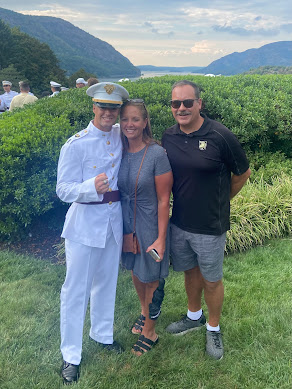 After lots of oohs and ahhs, hugs and pics, the Firsties
(WP's "seniors") try to head back to the barracks.
They are mobbed by plebes exercising more tradition:
a little something called "Ring Poop."
(Classy, I know.)
The plebes all gather around to block them from getting
through and in very loud, sing-song-y voices, exclaim:
"Oh my GOSH, sir [ma'am]! What a beautiful ring!
What a crass mass of brass and glass!
What a bold mold of rolled gold!
What a cool jewel you got from your school!
See how it sparkles and shines?
It must have cost you a fortune!
May I touch it?!?
May I touch it please, sir[ma'am]??!?" 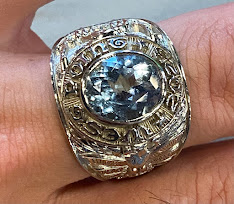 It's the only time the plebes are allowed to harass them.
I found an older version here on youtube that's really
worth the watch.  Some Firsties make a game out of
trying not to let anyone catch them.  Ours got caught
a few times pretty well but the only one that someone
caught on camera was just a single here.  No civilians
are allowed back there so it's better than nothing...
but I sure wish I could've seen the mauling that
came as he headed farther in! 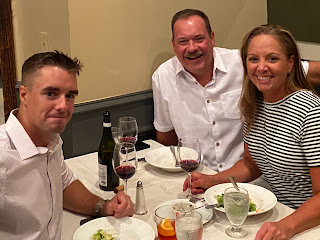 After this we treated the cadet to a dinner at the same
place we took him for his "last civilian meal" over three
years ago:  Brother's Trattoria.  The food is top-notch,
and the owners have a way of working the room
so that by the time you leave, you feel like family. 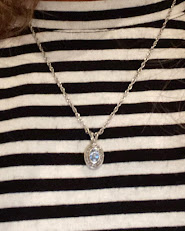 Pic taken in a dark restaurant but it says
"West Point 2023"
When they saw my son gifting me a necklace version
of his class ring <sniff!>, they brought him a cannoli.
Now how did they know cannoli was his all-time fave?
And, YUM--far above any we've ever had! 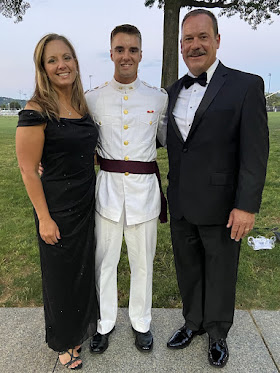 The next evening was the black tie banquet. 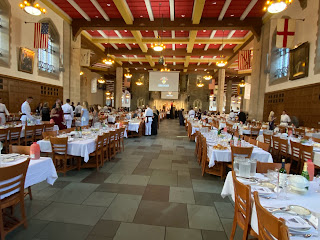 This took place in the huge mess hall.
Above is taken from about the middle of just one
wing; the hall seats over 4,000 cadets:  all
of them are fed--famously--in 25 minutes.
Impressive, eh? 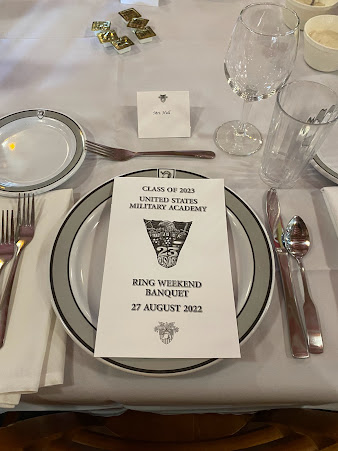 Mom here had to take a pic of her place.
Up there it says "Mrs. Hull".  That's me.
With a place at the table.  At West Point.
All these years and it's still so dreamy!
(I get choked up all the time around there.) Alright, truth be told, I swiped that little place card
and it now has a prominent place in my studio.
We were told to take the commemorative wine glasses
bearing the class crest but, oddly, no one said anything
about the paper place cards.  I guess I'll just let that
enhance the rebel-ish-ness of my shameless act. 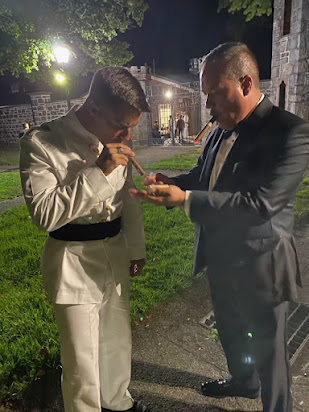 Cigars are another WP tradition.
(Read up on Grant sometime!)
Hubs didn't know I snatched this pic until later
but he is so happy I did--a moment to cherish.
(Props to me.) 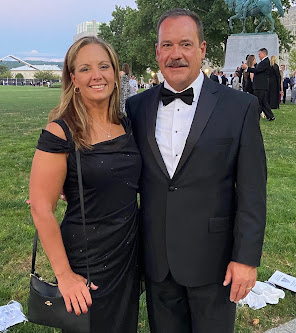 Not bad for being all sweaty in an
apple orchard just hours before!
Other good times had: 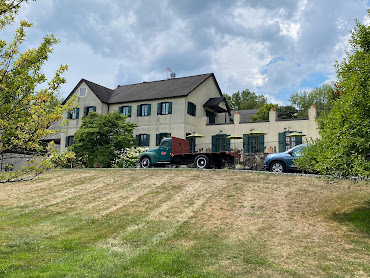 Hubs and I visited Stoutridge Vineyards in Marlboro, NY. 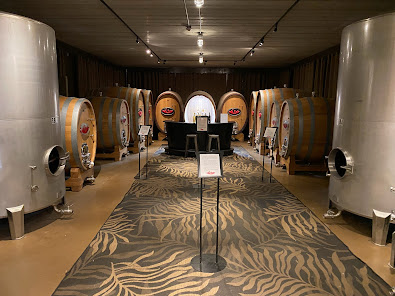 There we sampled some lovely spirits... 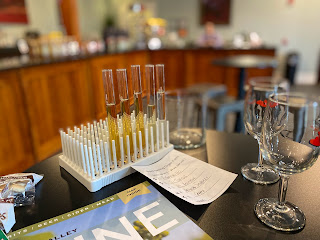 ...and, ahem, added some weight to our suitcases. 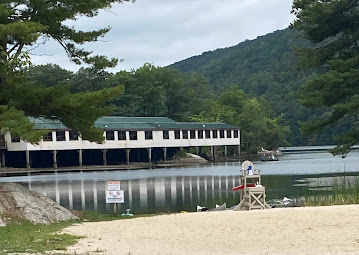 For Mass we finally got to see a small part of
Camp Buckner, where BEAST (intense Basic Training)
and all other summer training occurs.  This weekend
there was a retreat being held there for the
underclassmen (thus the Mass out there).

We were early so I tried to casually get a few pics.
Any Firsties present had their rings blessed.
For breakfasts, we visited Jones Farm one day,
and FiddleStix Cafe the next.  Both are quaint
little local places in Cornwall, NY.  Another was
Andy's in Highland Falls, just outside WP's gate. 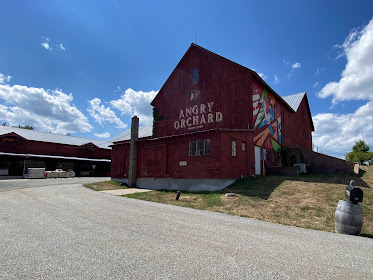 We also had a great time touring Angry Orchard
with our cadet, some of his friends and their families. 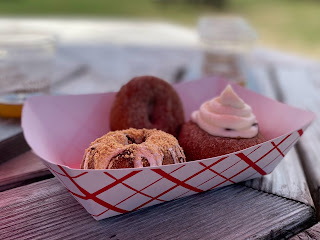 I'm not a donut eater but the basic cider ones were great!
The s'mores and cannoli ones were too much for me but
the Cadet was all over them. 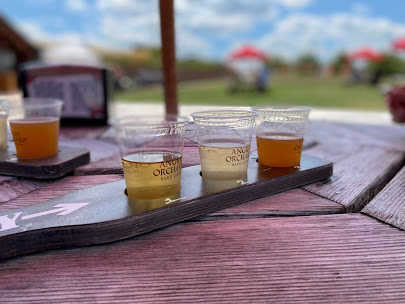 I am a huge hard cider fan and was happy to try
some of Angry Orchard's more special varieties.
(Better than what is on the shelf at the liquor store.)
After 4 years of visiting the area we can now give
all kinds of recommendations.
Hotels, restaurants, ice cream parlors, orchards,
wineries and bourbon distilleries...
we got ya covered.  Just drop me a line!
But now it's back to class for the cadet and back to the
quilt studio for me!  With all the travel, I've had plenty
of time to peruse quilt books and the list of
current-inspirations is long--and effective!
I wish I had three of me so I might get them all
made in a month!
Next week's to-do's
1) Finish blog hop post
2) Quilt Once in a Blue Pumpkin
3) Finish West Point Stars II Top
4) August Monthly Goal Post
5) Next-Projects Update Post 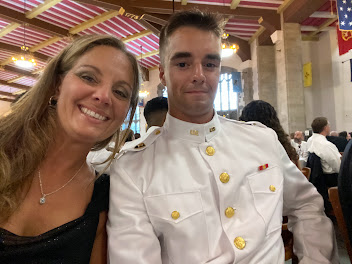 Happy quilting!
~My Lousy Post Script~
Well, that "C" thing finally found us while we were
out travelling.  I, who have not been sick for years,
have finally been hit.  Hard!  That list up there?
I'll just repeat it next week.  I'm going to bed!
Posted by Cheree @ The Morning Latte at 5:00 AM

Your trip sounds awesome, but so sorry you got covid as a souvenir. Take care.

It was fun following your trip on IG and seeing the pics here with “the rest of the story”. So sorry you brought back THAT unwanted souvenir. Seems like everyone is getting it after traveling these days. Hope you feel better soon.

What a wonderful post! I loved every word and enlarged all the photos and thank you for sharing it all. I enjoyed the Youtube video and the history (that chain across the Hudson!) and the explanation of the traditions. You look so pretty - especially that evening dress! - and you and your son and hubs are such an attractive family. Sorry you got Covid, please take care of yourself and get better soon!
Thank you for sharing with To Do Tuesday!

Wow! Thanks for sharing your fabulous trip! How very special! Proud parents are evident in every word and photo!
Sorry about being sick. The new variant is ruthless! And you were in the thick of it! Hope you have a short bout and recover quickly! I’m still fighting a cough and congestion from August 1. Take care!

That sounds like an amazing trip, Cheree! So fun to follow along! No fun on coming home to Covid, though - hope it's a mild case and you're better soon.

Well, I thoroughly enjoyed this post. The Ring Melt is a very cool tradition. So many traditions that were interesting to read! I'm so glad the weekend was completely enjoyable! Congratulations to your son, and to you two! You have every right to be proud!

What a wonderful weekend for you and the Cadet. I know much more about the Naval Academy having lived near it off and on and Dad being a Naval officer, although he didn't attend the academy. So sorry to hear you were hit with the big C. Take care of yourself. We've been going out much more than we used to but haven't had it hit us. (Or if it did it was so mild we never noticed it.) And I sat across a table with a friend who was having a horrible time with his allergies. Except, oops! It was covid. Despite hugs and sitting for over an hour together nothing arrived at my door! Weird. All your stuff can wait a bit.

What an amazing trip and you must be so proud of your son. All the best for the quilting and sewing this week.

Wonderful pictures - Proud Parents and a handsome son to be proud of! Congrats!

What wonderful memories you made!! I will have to check into Hard Ciders, I am not a big drinker, but love Cider. Hope you feel better soon!