Another Christmas has come and gone
and another new year is off and running.
I guess I should be too...or should I? 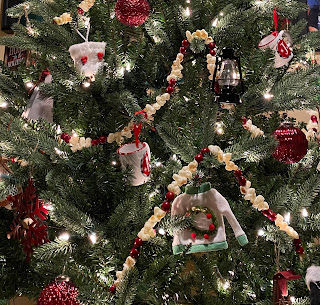 While everyone was home, I generally stayed off
of technology.  Mostly because I just didn't have
time but also because it was just....nice!  But, here I
sit, 4 days into the new year with no yearly wrap-up
or plans for 2022.  With all this blog housekeeping
nagging at me, I'm going to get right to linking up to
Texas Quilt Gal's Tuesday To-Do.  Then, at my own pace,
I'm taking today and the rest of the week to get caught
up around here.  I should have more to share on my
year ahead later this week and for next Tuesday. 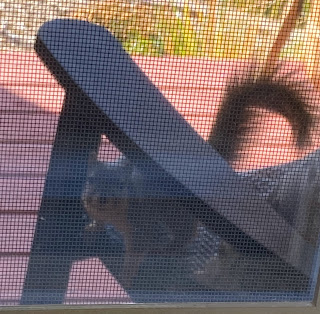 I also generally stayed out of the sewing room
over the holidays, though I did do some tidying up.
And when I tidied up, I found a few little kits that I'd
purchased throughout the year so I figured it was
squirrel time.   But not in the sewing room. 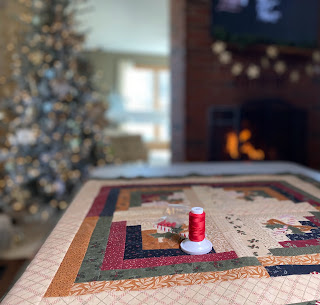 After the holiday activity was mostly over, I set
myself up to enjoy the fire, Christmas tree, football
and movies while making a little log cabin topper
from a Kansas Troubles. 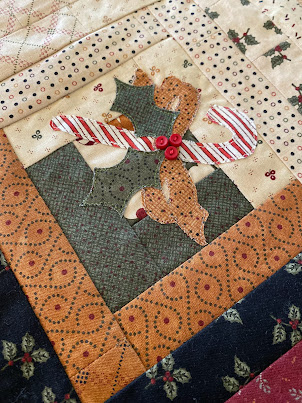 I'm not sure that I agree with it being "charm pack friendly"
but it did lend a more scrappy look to it overall which
wasn't necessarily bad.  There are just quite a few
"patchy" spots that log-cabin blocks don't usually have.
(note corner of gold above)
With a little touch of applique and button-sewing, it
made for a nice holiday squirrel project and I am now
one gift in for Christmas '22, as crazy as that sounds. 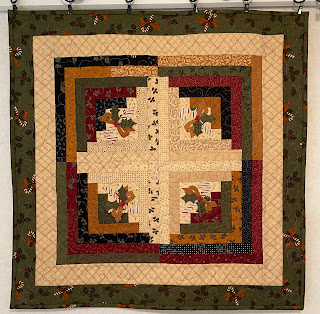 With the long arm still acting up
(there's my hint for big plans in the coming year)
I did some FMQ on my regular machine.
(Wow, am I out of practice there!) 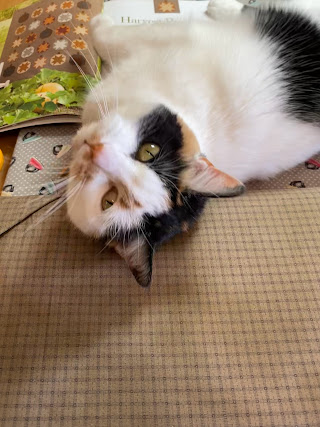 After everyone had gone home, I jumped in a little more
and I now have my first quilt of the year started.  Above
Chloe was helping me pick out fabrics.  Using a plaid
as a background fabric has me just a little concerned
but the plaid is small and softly-printed [aka, faded];
and except for as it nears the selvages, it's pretty
darned straight.  There's also the fact that, frankly,
I just flat out want to use it so, between my inner-quilter's
voice and Chloe's seal of approval  I began cutting away.
With that teaser I'll leave you all to wonder what it is I'm
up to.  I should probably play this up like I'm creating
all kinds of intrigue but it's really that along with being
behind on all my plans, I also haven't had time to get
any pics taken either. 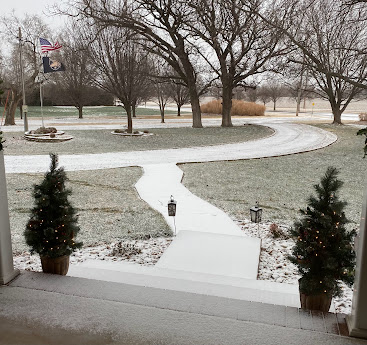 Well, I got one of the tiny bit of white stuff that
we finally got on New Year's Day.
Now, before I dig into my housekeeping, I'm off to
check out what everyone else is showing off at
Texas Quilt Gal's link up.  This probably hints at just how
much housekeeping I'll get done today.  LOL.
Like I said, at my own pace!  <wink>
Happy quilting!
Posted by Cheree @ The Morning Latte at 9:18 AM

I think too many quilters think they need a plan for the new year - why not go with what you feel like at the moment? LOL - really too many have a list the length of their arm and then wonder why so little gets done - if a person has to have a plan start with two or three - more reasonable then 20

Oh, those big plans sound intriguing! Chloe was quite the helper, I see. She's giving the fabric the snuggle test, apparently! I look forward to seeing what you are making with that fabric. Your little finish is a cute one, too! We have snow coming tonight - I'll try to send some your way!

I love the real squirrel ;) The new mystery sewing project is going to be fun!

It is a good idea to take a break from thinks, even those we enjoy. I love the log cabin table topper. Gorgeous.

The log cabin tabletopper is really neat - very warm and cozy looking! I'll enjoy seeing what you do with that backing fabric, too. Hope the grands loved their new quilts!

Hi Cheree! One present finished already - what a fabulous way to start the first month of the year. I predict a new longarm in your new future! Chloe looks quite helpful (and comfy) in selecting fabrics. I love the faded look. I'm afraid I steer away from plaids mostly because they always seem to be skewed. I look forward to seeing this project come together!! I thought you guys had picked up more than a dusting of snow, but now that I think about it, our latest storm was probably a rain event for you. Happy 2022! {{Hugs}} a bunch. ~smile~ Roseanne

Love the Squirrel!!! And I adore plaids, so I can't wait to see what you make with that lovely piece.

What?
You have already a gift for 2022 Christmas. And it is beautiful, Cheree.

It's all about balance. Take things at your own pace. It will be just fine!

I'm intrigued by your big plans! Maybe you've already posted about them, since I'm behind in my blog reading - lol! Love the plaid Chloe picked out.
Thank you for linking to To Do Tuesday!