I know I keep saying this but really?
It's Friday again?  Already?

At least I have two more blocks done. 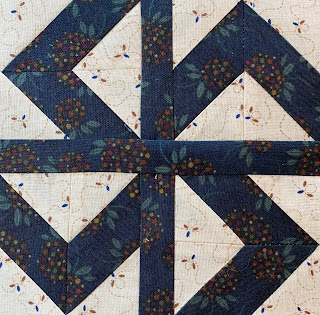 There are so many Farmer's Wife blocks out there
that a person could easily question which book a
specific block came from.  Not this one though.
We're quilters and we look at all the pieces but that
symbol is still so powerful it's hard to not see it.
In some ways, I hope we never forget it.
The swastika gained a whole new meaning when
Hitler put it on the Nazi flag in 1920.  I think it's a pretty
easy guess that American quilters--and probably the
rest of the world save for maybe Germany and Austria's
surrounding countries--didn't have a clue during most
or all of the 20's what it would come to symbolize.
But I am guessing this wouldn't have been used as
much in the 30's.  And later.  Is it rare now?  Am I being
silly--it really isn't the exact same?  I have no idea.
I'm just curious.  I read a lot of books from that time,
especially on the Holocaust so I guess these are
things that come to my mind.  Needless to say, it's not
a favorite block for me but I'll try to look at the overall
design which still is kind of pretty.  I like the triangles,
how it looks a bit like a ribbon on a gift and so on.
Among all the others, certainly that will be all that shows. 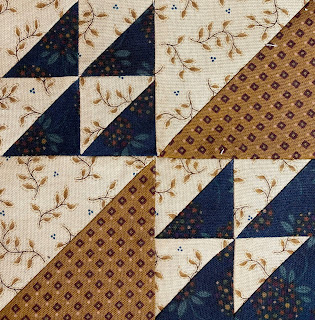 I guess I have no historical commentary on this one,
other than that it is now in my history!

And speaking of history--and I know we're all tired
of hearing this--but really, we are living in such a time!
I saw the other day that children especially should be
keeping daily journals to become historical accounts to
share with their own kids and grandkids.  I think this is a
fantastic idea!  At the very least, what a lesson in historical
documentation it would be for them, not to mention
a great homeschool project.  If my kids were little
I would have been all over it.  My oldest son has
already pointed out he now has events of huge
historical importance that he'll talk about to his
grandkids, just like his great-grandparents did.
I think we'll see more respect and/or attention to
historical events, knowing that they have real impact!

Hope all is well in your area - this is all so scary especially when the news says our area (Texas) will be the next hot spot. I guess all we can do is pray that this passes soon. I have been enjoying my new rotary cutter. I think of you every time I use it!! Thanks again.

Not quite like the swastika, but close, yes. Sad that Hitler took a simple block and turned it into something that makes us all think of evil.

I've used that first block to represent a bow on a present on a quilt back made many years ago and had the same thoughts that you expressed. But it worked so well, I ignored the uncomfortable feeling it gave me to use it. I wonder if younger generations will feel the same about it? My grandparents lived through WWII, my mother wasn't alive then, so that's not in the stories my girl heard. I've not asked my college kid about her views on our current historical moments. She writes for her college newspaper and I know they've been covering a lot about how it has affected students.