Happy Friday to all!

Two more completed blocks to show today.
Still plugging away amid my other projects--and
I've been doing a lot of knitting and long-arm quilting
which means I'm also doing a lot of binding and
making labels, etc. etc.  It's a rough life...<wink>
I've also been enjoying our latest snow, though
I was a little sad it all happened over-night.

The first was a no-brainer and a good one
for using some directional fabric. 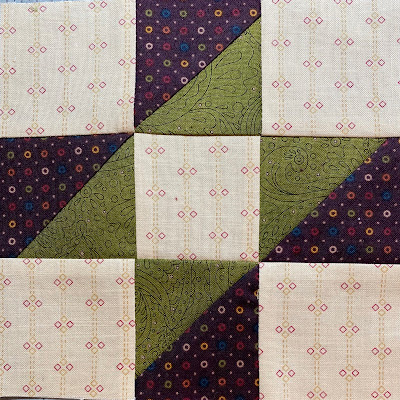 Next up, the 44-pc Bias Blob.
I brought out the spray starch which is probably
the reason this thing didn't turn out too badly.
That's the first time I've starched pieces; it will not
be the last!  It was more helpful than I realized.
(I guess it's about time to put a new cover
on my ironing station anyway...🙄)

I went with a directional yellow fabric on the
second one telling myself that however I cut 'em is
what I'm going to use, also thinking it wouldn't even
matter on pieces so small.  Turned out all but
two triangles would go the same direction.
(top inner 2--one just goes backwards, the other goes "up") 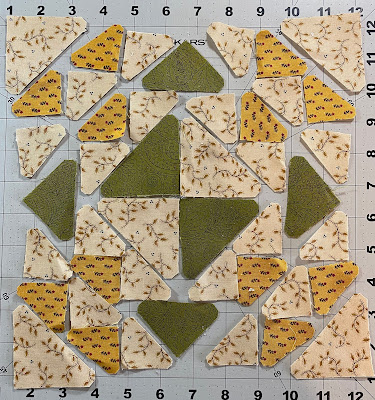 In retrospect I would've been better off keeping them
all in random directions but my sense of order...oy.
Unfortunately, my "get this done" sense cut off the
more common sense that would've told me that all
I had to do was cut two more in the right direction
and "problem solved!"...well, who knows why
I didn't.  It would've taken a mere 3 mins but oh well.

As has become my mantra for this whole quilt:
Who's really going to notice among 110 blocks?
Ha!  Maybe that's what I should name this one:
"Who's Really Gonna Notice?" 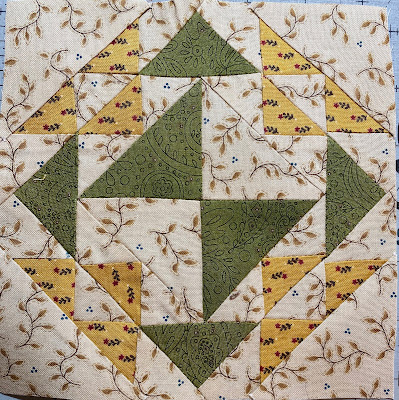 I think it turned out okay, especially for no ripping.
A little pulling here and there, a tiny bit off here and there...
Had I realized that middle green triangle point was off
so badly, I would've ripped but just didn't see that one
till it was bury-sewed in among the others.
Bury-sewed.
(Just made that up but you know what I mean?)

And there it is.
I mostly-conquered the bias blob,
and lived to tell about it. 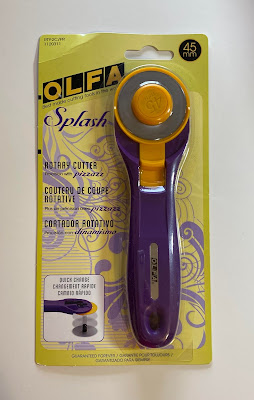 The hubs will be choosing the lucky number for
someone to win that rotary cutter later today
so if you have not entered yet and you're quick,
please go here and you can get in on it.
*Update:  This giveaway is now closed.

Your bias blob turned out pretty good! You have much more patience than I do for tackling this one! It is a pretty block and who would notice it right! If they do, then off with their heads:)

Yes, that looks like a hard block to make. You did a good job with it. If someone notices, make THEM remake the block.