The sun is shining but tonight things turn and
tomorrow should be a glorious snow day--I hope.
A friend who's brother was a meteorologist says that
of all the weather, snow is the hardest to predict.
Well, it's at least easy for me to predict where I'll be.

A quick update on what I've been up to: 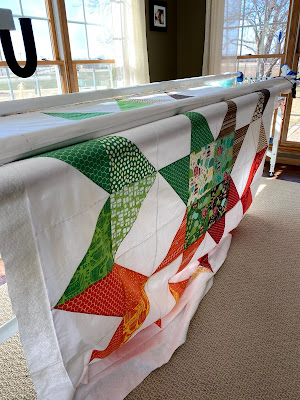 The Moda Love Farm quilt is loaded and I've gotten a small
start on the quilting.  If it really does snow I'll likely want to
stay in my sewing room but it's nice to have options. 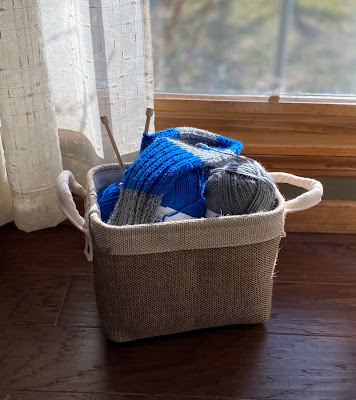 With warm weather over the weekend, I ended up taking care
of much-needed outdoor chores--like cleaning out the coop.
(They'll appreciate that new bed of straw tonight!)
It cut into my knitting time so I haven't finished the scarf.
It's going quickly though and I feel ready for
more knitting challenges already.

I spent a lot of time last week on a new quilt that I've
not mentioned yet.  For now, I'll just say it's
mostly of HST's and I'm going scrappy--of course. 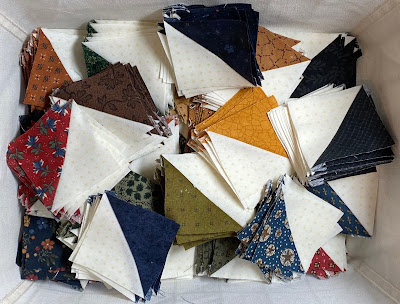 I sewed up approximately 560 HST's from a Riley Blake
jelly roll (Swiss Dot) and my own scrappy strips--way more
than I'll be needing but I'm sure I can fit the extras in a
border or in the backing.  It's interesting making HST's
from jelly strips:  a lot of cutting but at the same time,
the way I did it resulted in perfect 2.5" HSTs.
There was a tiny bit of waste but I wanted accuracy,
and I didn't want to have to trim each square later. 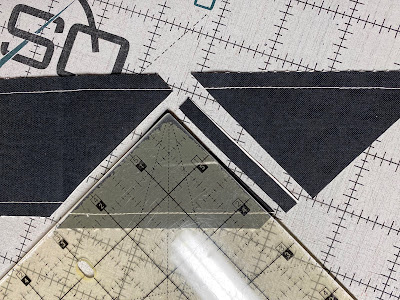 It was a lot of cutting but I spread it out
over several days so it was enjoyable.

It was last year at this time that I hit MSQC and found
great bargains at their bolt sale so I've been hoping
for another this year.  So far I've not seen any mention
of it so I'm just keeping my road trip plans "on hold".

So this week I'll be finishing the farm quilt and scarf.
After that, I've got farmer's wife blocks to complete
and the remainder of my next quilt to cut out.

What are your creative plans this week?

Happy quilting and knitting!
Posted by Cheree @ The Morning Latte at 4:50 PM

Good luck on the snow. You can have it. I'm tired of it already.