The Wind Through the Trees...

It was unanimous (myself included).
The simplest quilting pattern won out. 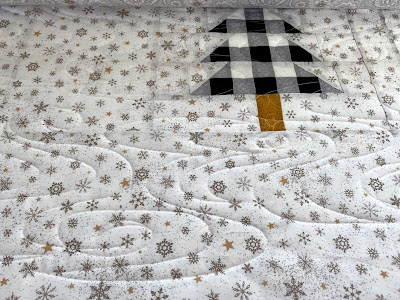 Doesn't it look just perfect on these trees?
Almost giddy about that.
(Hope you can see it well enough) 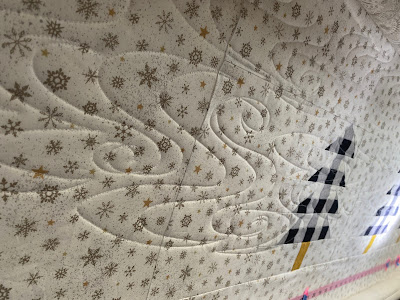 I'm taking my time with this.  The pattern is simple
but it's actually fairly "deep"
(standing perpendicular to it as one quilts)
which means I'm having to do some slight leaning.
And slight leaning is about the worst thing for my back.
Worse than leaning way over.
But anyway, it's nice to not have any deadline
except for being excited to get it on our bed.

How's everyone's Christmas shopping going?
I have quite a bit done but haven't wrapped
a thing.  In fact, I've barely decorated a thing.
Pretty unusual for me but I'm having tree issues.
After TWO NEW trees were defective
(yes, two separate trips to the store)
I was so frustrated I thought I'd pull out last year's
half-dead tree back out and just work harder at it
seeing if I could--I don't know--will it back to life? 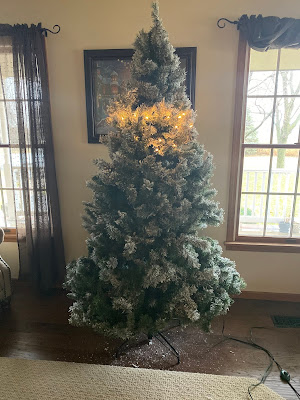 The glorious Christmas glow I was after refused to appear.
Back to plan A.  The one where I get a new flocked
tree and throw this one away.
Flocked trees make a mess--one that's totally worth it
if you ask me because of my snow-love and all.
However, making this mess THREE times and still
coming up empty isn't my idea of holiday fun
so I just stopped.  Can you blame me?

I'd love a real tree every year but I've had enough of spending
hours wrapping lights so that's not happening.
Maybe some day I'll change my mind but that's where it is now.
HONESTLY!!
Why can't they make a darned tree that works, and lasts??
(I seem to recall posting something about this last year
when the above tree had just 3--*just* three??--strands out.)
Yes, I realize I'm sounding like a bit of a Bah-Humbug.
I'll work on that.
We have had some good laughs over all of this.
A new tree arrives today.  Crossing fingers. 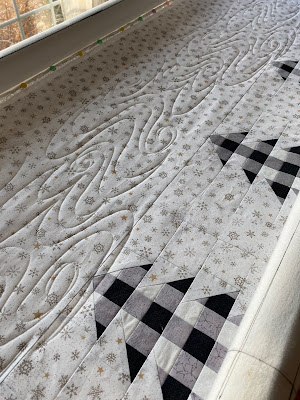 Quilting blowing wind over snowy trees should
cheer anyone up, right?
At least these trees will last!
Oops.  Said I was going to work on that. ;o) 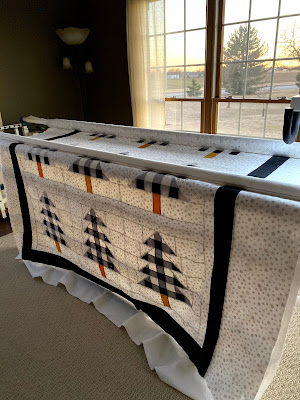 Above shows where I'm at currently.
At 91x109, it's a pretty large quilt but I think
I'm nearing the home stretch.

Happy quilting!
Posted by Cheree @ The Morning Latte at 10:15 AM

I have had one or more cats for over 20 years (and have never been home for the holidays) so I don't but up a large tree, only a little primitive tree with no lights. This year my Christmas decorating may be limited to hanging Christmas quilts I've made over the years.

Enjoy the quilting and the snow.

That is the most frustrating part about prelit trees. I'd stick to the plaid trees to boost your attitude! lol They're beautiful.

I love your design - the black and white trees are beautiful

Lovely swirling snow on the quilt. Sorry about the tree(s). We just wrap the tree in strands of lights. My mother has been thru several pre-lit trees (they only seem to last a year, two at the most) while we are on the same tree for about 20 years now (no flocking).