A Visit to The Hudson Valley in Fall 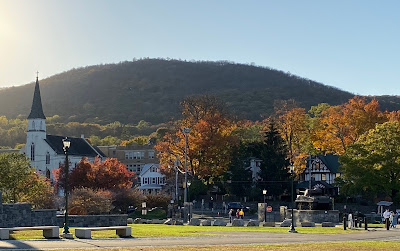 Highland Falls, NY just outside of the gate to West Point

First of all:  brrrr.
It's 19 degrees out with a dusting of snow.
And I forgot it was Halloween.  I guess that's what
happens when your kids are all grown up?
Or it could be all the traveling.  I knew Halloween was in
here one of these days but I'm still trying to figure out
what day of the week it is.  When the barista here at the shop
walked in before me in these skinny white pants I thought it
an odd wardrobe choice but then I saw his Patrick Mahomes
jersey and it all made sense.  (Nice choice, btw.) 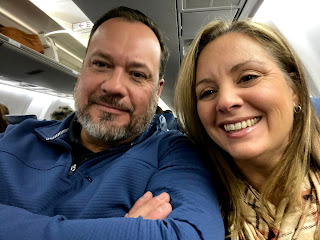 Well here's hubs and I boarded on our 6 am flight
to Newark.  Knowing we were off to visit our
cadet made it pretty easy to get up at 3:30 and
after some coffee, we were pretty wide awake! 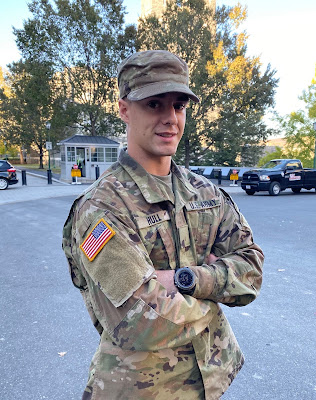 Arriving Thursday evening, we were able to grab
a quick visit here outside the barracks and then
sit in on a track practice.

On Friday there were various events around the post for
parents to take in while the cadets were in class.
We had the opportunity to actually sit in a class with
our cadet but, as for many, this was not his preference
so we're saving that for another year when he's
more comfortable.  The parents of older cadets say
it's an experience not to be missed. 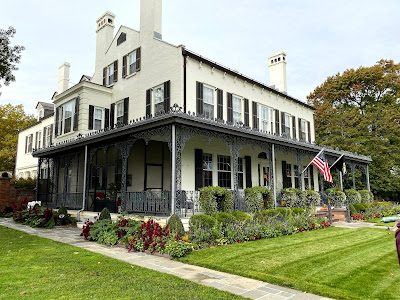 We finally got the chance to tour the superintendent's house.
I'd been looking forward to this since our first visit to WP.
No pics are allowed inside but it is filled with lots of famous
paintings and furniture--ie, secretary desk that Robert E Lee
used and a clock gifted by the Marquis de Lafayette.  Personally
I was enamored by the kitchen and awed by the very detailed
work that the chef (a soldier as well) and his assistant do.
Just the two of them!
At 180 occasions per year, there are more entertaining events
held here than in the White House or anywhere else
in the army.  Built in 1820 it is one of the oldest buildings
on the grounds so that dining room has had an incredible
list of notable people.  They try to get every cadet a dining
experience during his/her time there--and they receive the
exact service as any congressman or even president would. 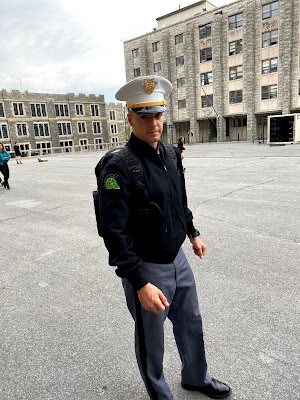 We were actually allowed back to their barracks for a quick
visit.  I think this only happens on Parents' Weekend so we
took advantage of that and, after meeting some of his closest
friends (great guys--which always makes a parent happy!)
we headed off to a dinner of his choice. 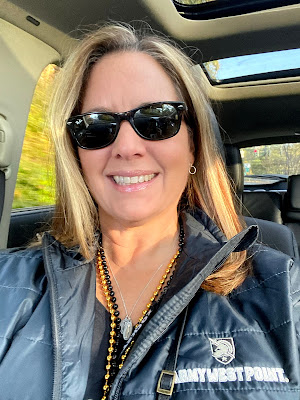 Saturday brought the football game which I'm always up for!
I had my game apparel on, the weather was gorgeous and
the campus/post was more beautiful than ever in the fall. 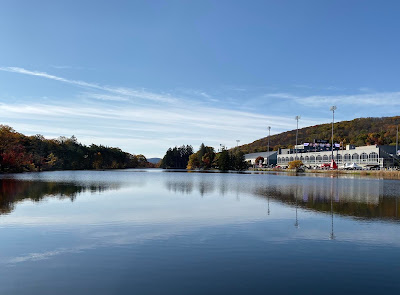 I'm convinced it's the prettiest in the country.
Above is heading up to the stadium. 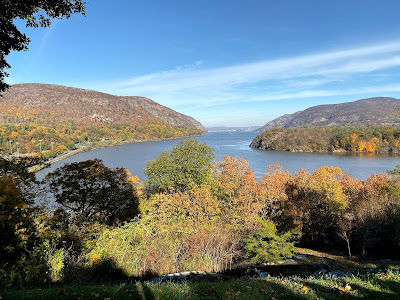 Lookout over the Hudson
Didn't get a great pic due to people everywhere but you get the idea.

I've also decided that the whole Hudson Valley is the prettiest
place in the country and the prettiest place I've ever seen,
at least in the fall.  Ireland comes close.

The cadets were surprised with a last-minute granting of
leave so he was able to spend the night with us in our hotel.
Sadly, on the floor but he didn't mind at all after having spent
nights out on the ground/rocks at Beast this past summer.
In fact, he got a rare 8 hours of sleep and was super happy.
(We tried for a roll-out but none were available.) 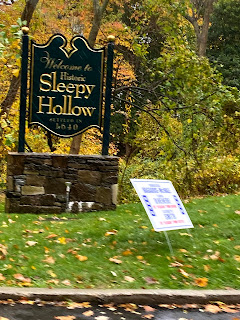 Then we headed up to Sleepy Hollow just
to see what we could see and it did not disappoint,
even if the weather did--it was pouring! 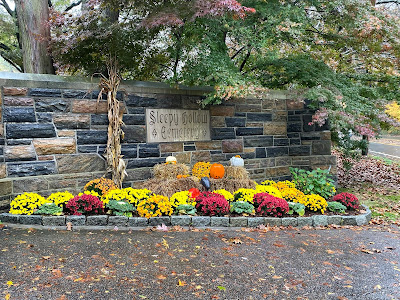 We found the light house at Sleepy Hollow and
the amazingly beautiful cemetery. 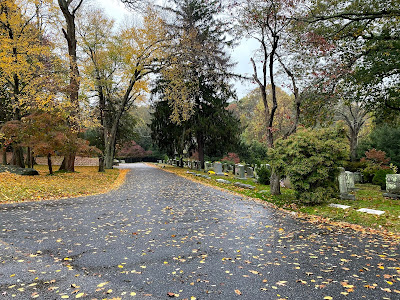 I got soaked hopping out of the car every two minutes
to snap pictures but it was worth it. 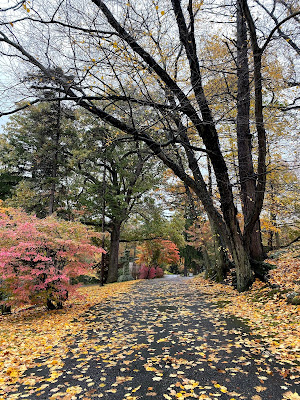 But, due to the rain, we weren't able to see
Washington Irving's grave which certainly would've
added to the experience. 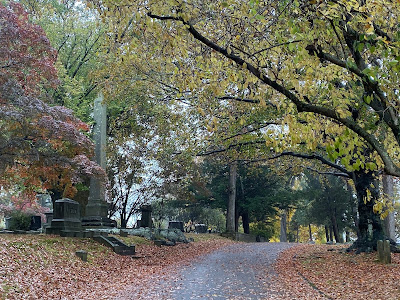 Still, visiting Sleepy Hollow Cemetery right before
Halloween was pretty cool by itself. 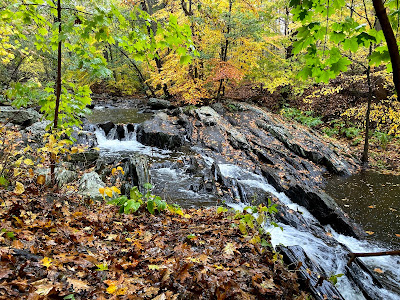 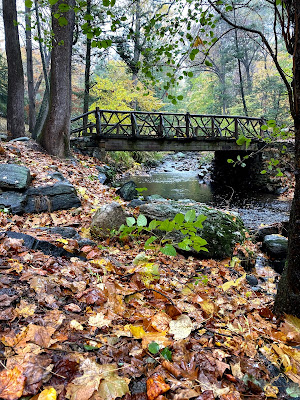 Here is "Headless Horseman Bridge" though
no one really knows which bridge Mr. Irving
thought of when writing his story.  Of the five
bridges around Sleepy Hollow at this time,
sadly none are in existence today.

We ended the weekend with a late
lunch at a local Mexican restaurant--son's choice.
And then all too soon it was time to say goodbye
which is always hard but it makes it a little easier
when he is happy and ready to go back.
He's doing well though stressed--as they all are.
Just the week before there was a very tragic suicide
in my son's barracks. This hit all the cadets hard but
our son said that after the shock, they seem to have all
really come together to support each other.
This is not a normal college experience.
They are put under immense stress--it is part
of the training for our country's future protectors
and leaders.  Pease keep them all in your prayers,
especially the family of the deceased cadet! 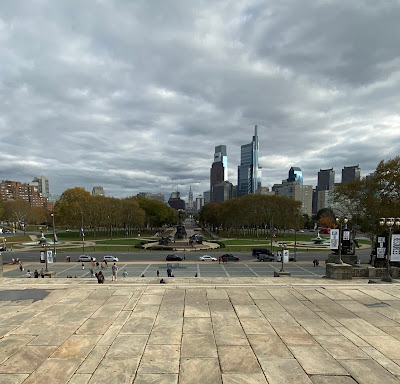 After leaving West Point, we headed off to Philadelphia.
I'll share a little of that tomorrow along with my next
quilt project.  I didn't even try to find quilt shops on
this trip, though one of these times I might.
For now, I'll just use the fall colors and the history
(more on that tomorrow) as inspiration.

Posted by Cheree @ The Morning Latte at 9:31 AM

What a great weekend with time spent with the cadet! Thanks for bringing in the details of what they go thru.....more than any other college experience they pile on the stress too. Glad you had fun and extra time together. Beautiful photos.

What lovely photos, especially of you and your hubby. I'm glad you got to visit your cadet. I would think that there is extreme stress there. Those that make it all the way thru are the cream of the crop. So sad for that cadet and his family.