It's been a great run this season
but the brutal hot days have arrived. 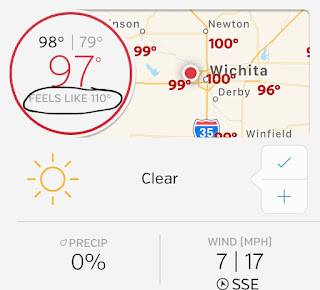 Blech.
And soon all the green around here will turn brown.

At least there is plenty of color coming from the garden.
We're getting the prettiest blackberries, and the most that
we've ever had.  Of course I'm freezing them for smoothies. 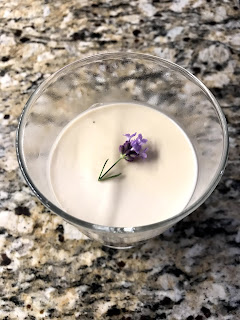 I made lavender panna cotta for the first time--
a super easy and light dessert.
And the season's first ratatouille.  Oh yum,
especially with a generous sprinkling of fresh
basil for garnish.

Moving into the sewing room...
I'll share the result of my latest trip up to
Missouri Star Quilt Company in my next post
but today I want to show how far I've gotten
on DS's quilt. 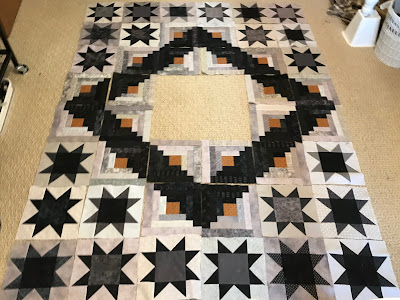 I've been pondering the center large star and I think
I've gotten it all planned out.  Time will tell.

Which brings us to saying goodbye to DS on R-Day.
We arrived early--around 6:30--and hopped on the shuttle
to "Ike Hall" where we got in line for that final good-bye.
No contacts are allowed during the 6-weeks of BEAST so
DS was in his glasses, though in just a few hours would
be wearing government issued ones. 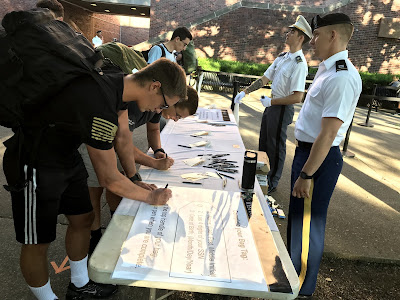 Everything DS would need is in that stuffed backpack,
and this he would be wearing for hours yet.
In some ways I think that would be great, that minimal living.
But then I remember my fabric and my machines... 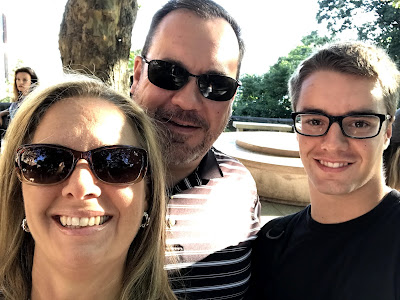 So we moved along in the line for a while taking a selfie
here and there, supposedly to lighten the mood and
to pass the time but this mom really wanted those last pics.
All this time there is an "elephant in the room" that none
of us are really addressing.  All of us in line know what is
coming and none of us wants to dwell on it so there's
nervous chatter, laughing...avoidance.
Eventually you come to realize that they keep it
to 60 seconds for a very good reason.

Finally we make it into the auditorium where they're taking
two seperate groups of about 25 or so to-be new cadets
and their families.   The door closes behind us and the
mood changes instantly.  The free-flowing chatter ceases.

The parents and families are first addressed with what will
be happening throughout the day.  Was I listening?
Not really.  I was totally focused on not losing it here
in a bit, especially reeling from that crazy day/night of
travel with the wee 1 1/2 hours of sleep.
One of the cadre then steps up and loudly and firmly
addresses the appointees with a few words of guidance.
He ends by telling them they
"now have 60-seconds to say goodbye". 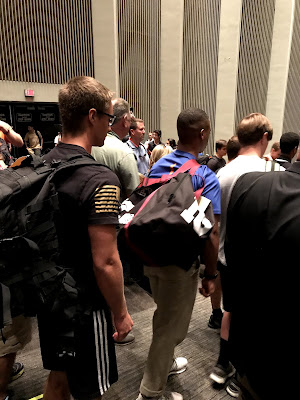 Super tight hugs and last words exchanged...
and off he went.  And that was it.
All throughout the events of that day,  it would
occur to me how an entire year of hard work--his but
with our help and always our stress--and excitement
were all leading up to this day.  And it was done.
Well, our part was.  His was just beginning.
Did I succeed in holding it together?
Amazingly, I did pretty well.  Let's just say it sure
could've been worse.  I attribute prayers there.

After the goodbyes, the new cadets go through what is
said to be their worst day in their 4 years there,
mostly due to the fact that they are being yelled at
all. day. long.
They receive their first uniform, get their hair cut, and
individually report to the Cadet in the Red Sash--
which must be memorized and delivered perfectly
while standing about 3 inches from the Cadet's
face before the appointee may go on.
They learn to march, are issued bedding and other
articles needed and are shown to their barracks.
And so on. 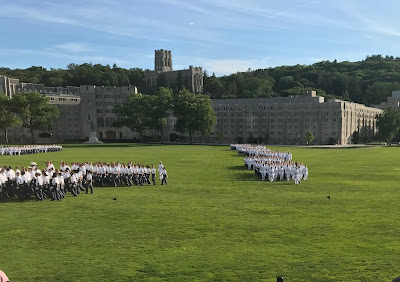 By 6:30 that evening, the parents are gathered in the stands
to get a last glimpse--if possible--of their DS or DD as they
march in uniform in their companies onto the field
to deliver their oath to the US Army.

This is where there Waldo hunting begins.
1,200 new cadets.
All those shaved heads and uniforms make it very difficult
to pick out even your own child--we were successful!
(If you're wondering, 23% of this class are females.
They must keep their hair pulled back and up.) 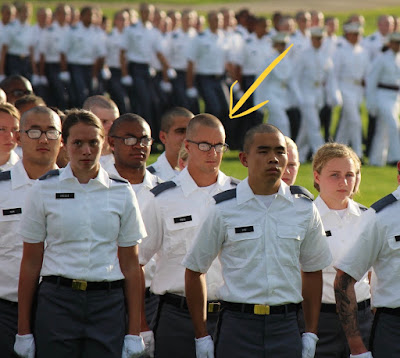 And there he is.
Yes, it is a super-proud moment! 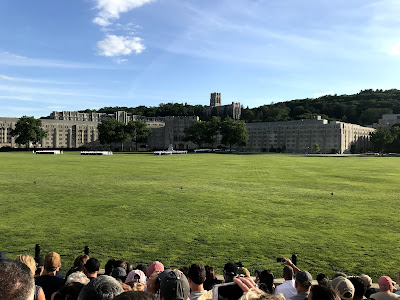 With the oath ceremony concluded, they all march away.
The day is over, your kiddo is in and you will not see or
hear from him for approximately 3 weeks. 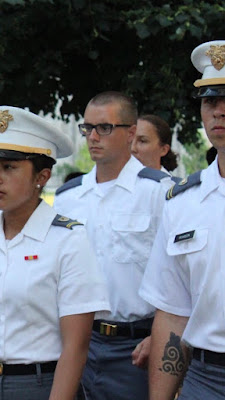 One of the few pics we have seen of DS.  There are rules
forbidding most pics from being shared outside of the groups.

Social media comes in super handy here--parents' groups
exist where all can share pics and help each other out,
especially those who live close enough for frequent visits
to the post, though they are allowed only in certain areas
and no contact is permitted.
I'm already thankful to these parents who happily snap
pics of all they can so that the rest of us can try to
catch a glimpse of our kiddo in action.
West Point also shares occasional photos to let us know
what is going on.  What a fantastic and supportive big family
we have joined!

We knew how much he looked forward to this, how much he
wanted it but it was still hard not knowing how it was going.
I just wanted to know if he still felt that way, if he was happy
in his decision.  Making this harder is that stern military face.
How nice it would have been to just see a smile??
Several days in, pictures from "Chaplain Time" were posted
and there was DS, up in the choir loft where he'd volunteered
to be and with a smile on his face.  This made Mom's day.

We did receive a very quick phone call this past week
and all of his excitement is still there.  For now it's enough
to know he's happy and that it's going well but we're looking
forward to the promised longer phone call this coming weekend.

I think it has taken me these few weeks to stop reeling
from everything.  Other life events have been taking
place as well, including our daughter moving back
out and starting her career.  I'm really hoping that
next week might be a calm one--for once!
It's seems eons! 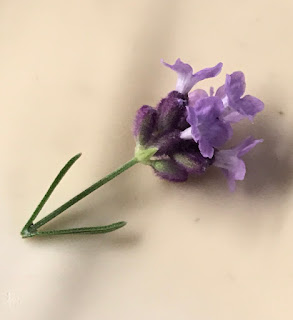 Today, after some house-cleaning and gardening,
I'll be working on the center of the militia quilt.
I'm excited to see what I come up with and to see
how the whole project comes together.  Not nearly
as momentous as experiencing a year-long
lead-up to R-Day, of course, but I'm not really
sure I how I'd handle another go like that!

You must have had so many emotions going at the same time. Military life is special. We enjoyed our years while my DH was serving and always remember them fondly.

And under neath all these emotions is pride.....you have raised and instilled a good foundation in a fine young man. It will be tough but he will persevere and you will be even prouder on the other end. My brother went thru military school and then reserve training.....I thought my Mom would die before he finished it all. She survived.
so glad you shared on the blog because now you have scribed memories to cherish.
oh, yeah....the quilt is looking great!

Of all the things my son's have done (worked all summer at Scout camp, off to college, etc) I never cried until my youngest flew off to Alaska over 5 years ago. It was the first time that I couldn't reach them with only a day's drive. I'm not a crier, but I boohoo'd most of that day that we put him on the plane.