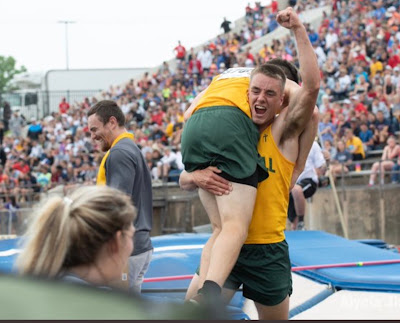 As expected, it has been a crazy busy time.
I don't have any quilty updates other than
to say that coach loved his quilt! 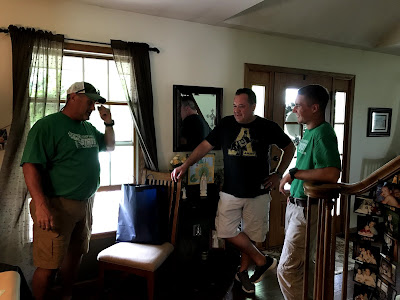 Coach talking with hubs and DS

I was helping to show the quilt so I didn't get a pic of coach
with it but remembered later to grab one just as he insisted
that it was only "a little awesome leaking" out of his eyes.

Now for a little background to understand
the excitement we had this past Saturday:
DS had struggled at a recent meet or two--still placing,
but not walking away with first place and still not hitting
his goal of 16'.  He did take first in City but then
got second at Regionals.  This was
leaving him nervous and unsure about State. 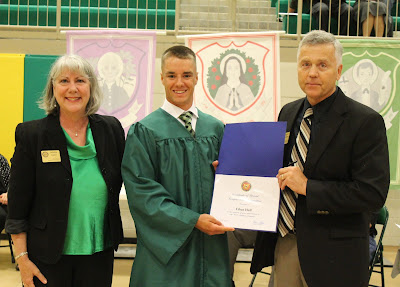 He's been busy with finals, USMA paperwork (always!),
taking 2nd in the Project Graduation talent show, graduation
and grad parties.  Part of him is trying to grab every moment
to say goodbye but another part has been very ready to move
on.  And that chance to hit that 16' goal seemed to be fading. 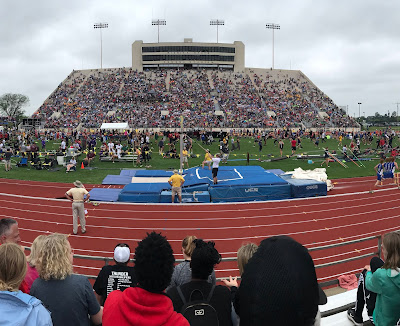 State had an amazing crowd this year, despite the rain
(and rain delays!).  This is a pano looking across from our side
which was almost as full.  I think I've mentioned it's the biggest
track meet in the country--no idea why.  Just is, I guess.

My son and his teammate (and friend) found themselves
in a tie for first so it came down to a jump-off--which can be
darned exciting for everyone because it's "sudden death".
Starting at 15' 6" they both cleared in increments of 3" till
DS alone cleared his coveted 16' and earned his second
state title.   His reaction (and the crowd's!) is priceless
so I had to share one of the media videos.
The first jump is his teammate making 15'9" and
the second is DS making 16'.  The third and final
jump shows his teammate missing 16'
to give DS the win.

(Make sure the volume is on!)
Video link:  Catch It Kansas

You can also see our video here on youtube but you can
only hear all of us yelling and that's not near as fun as a
crowd of thousands.  The below pic was online and in the
newspaper.  We were so busy getting ready that night
for the grad party the next day that we totally forgot to
watch the evening news.  Others have told us they enjoyed
seeing him multiple times on all the local channels though. 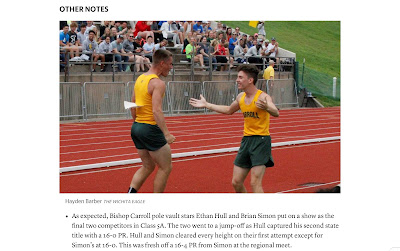 This duo has captured the sports media's attention for
a while now.  They did not disappoint!  (DS to the left)

It is always a little difficult when the guy to beat is
a teammate but I think this friend has shown the most
exceptional sportsmanship and we wish him the best.
We know he'll hit much greater heights in his senior year! 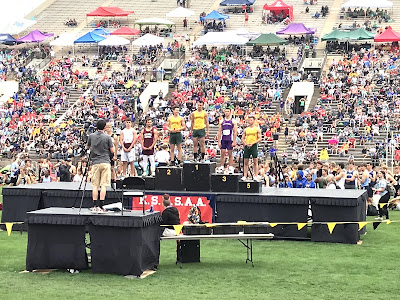 Unfortunately, the rain delays pushed the meet over into Sunday
and right into the time of our party.  DS was able to leave the meet
early to at least catch the end of his party and see almost all of the
the adults but with everyone else still at the meet only a few
of his friends made it before everyone moved on to the next
scheduled party.  (Lots had their parties that day) . We had put a
lot of work into it so the delay was kind of stressful; there was
also a lot of food leftover but in the end, it all just pales
considering the incredibly exciting event of the day before
so...no harm really done.  And hey, I do get time off of
cooking for awhile!

So now I suddenly find myself of with...woah!
What is this?  Nothing much going on???
What a weird feeling!
I think I need to start a new quilt!
Posted by Cheree @ The Morning Latte at 12:57 PM

Congrats for the record setting end to his year. Glad it all came together....so many plans, so much work, so many memories made. Yep, you need a new project:)