"Spring is the time of plans and projects."
--Leo Tolstoy 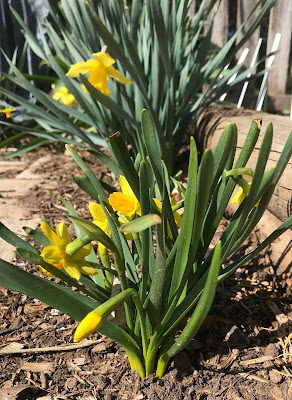 The garden is now showing spinach, kale, onions, peas,
scallions, radishes and carrots.  Typically I'm fighting
to get everything I can in as early as I can but this year
I'm a little more "chill" about it all. 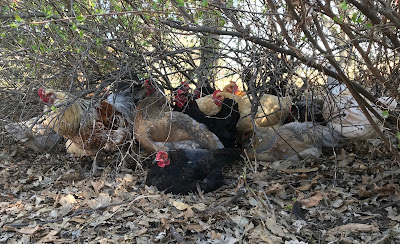 The chickens have finally decided to ante up and we're back
to 5 or 6 eggs a day.  With 16 chickens, that's still not great
but with warmer weather and longer days, we'll get there.
I'm back to letting them out every afternoon.  This rooster
seems to keep the hens closer to the house and under trees
and shrubs so I don't worry about hawks as much anymore.
I love that they're out there on pest patrol. 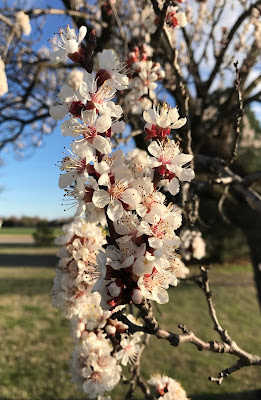 In the orchard, our newly planted fruit trees are doing well.
Only the old apricot tree is in bloom--it rarely produces anymore
so the freeze we had this past weekend isn't too much of a worry.
The pears are budding and the peaches are right behind
them.  I pray we are done with freezes; it's been several years
since we had peaches.

We're in our last high school track season with our son.
He started it off well by setting a new personal record
at the first meet with a 15'2" vault--he took 1st place.
From here on out there's generally a meet every week till
State at the end of May.  Mid-May brings graduation and
a grad party that will also be a Military Send-Off.

So as to the title of this post?
Plans and projects? 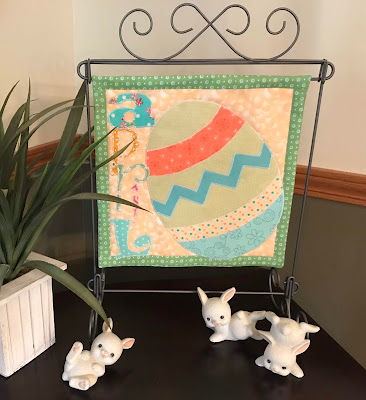 Another night-time pic; will have to catch a better one tomorrow!

I kinda flew through it but it's done.  And it's only April 2.
Eleven down, one to go!

Other things on the queue...

I decided to try something on the outer border of the West Point
quilt so that delayed things a bit more.  And of course the quilt was
just a few inches too big for the batting that I have--you know, the
one of which I have 40 whole yards? Add in a trip to the store. 😒 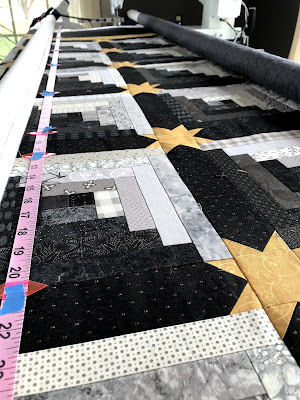 But it's now on the frame and being quilted.  I didn't
squeeze it in as a March finish but no matter.
I'm just happy to be this close. 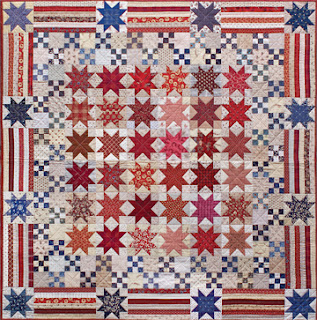 When I need breaks from the long arm, I'll move back into the
sewing room to work on the charity quilt (modeled after the above)
that I'm now starting. This will be my first scrap/stash buster
of the year with hopefully several more to come.  The stash has been
steadily growing, no matter how many times I've told myself
that there are to be no more purchases till fall. 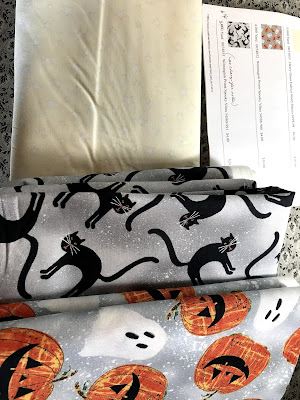 I came across these on an online quilt shop and couldn't
resist for $4/yd.  My reasoning is that I made such a big dent
in the Halloween fabrics last fall that there is finally ample room
for new.  It's a little hard to see but the top fabric has stars in it.
I thought this would make a great background fabric for
a lot of different things but especially for baby quilts...

And guess who has grandchild #2 on the way?
Due around Halloween so I'd say that makes my purchases
unobjectionable, right?  Ok, I didn't know at the time but we'll
keep that between us... 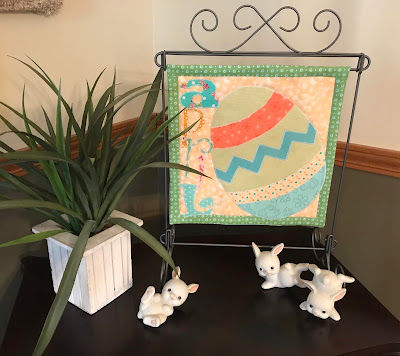 Posted by Cheree @ The Morning Latte at 5:30 AM

Things look good at your house! Spring is going to fly by for you and the empty nest is coming soon. But a new grandbaby will keep you stitching right along I know.

It sounds as though you have some busy months ahead. A new baby in the fall will be so exciting too. Congratulations to all.

Being just inches short of batting or backing is beyond frustrating.

Needled Mom: Thanks, and yes, that was a little frustrating!

Congrats on grand #2. I've never had chickens before, but I have had fresh eggs, YUM!