After some frustrating paper-piecing, I spent an afternoon making
a few of my Victory Mini's, as I've been temporarily calling them.
(based on the name of the original quilt Michael's Victory).
I haven't added to this pile in months and need to do better.
They're very slow-going but tackling a small amount at a time
is a nice "betweener".  It's also good on the ol' scrap bin. 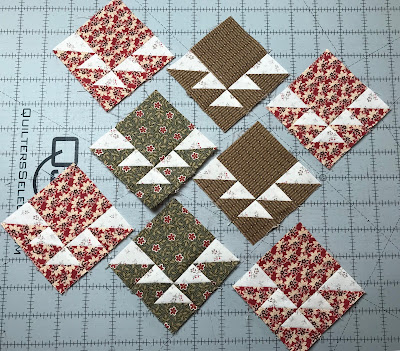 I keep saying I have no idea how this one will end up
but I'm beginning to feel that the when will be next fall.
I believe this is the only time I've had an "open-ended" project,
and I'm not sure it's for me. I think it messes with my need
for finishing things.  Having a deadline, even though still
a little vague, makes me feel instantly better about it.

I believe this puts me at a total of 72 blocks.
Keep in mind there are "blank" blocks between so,
in a manner of quilt-speaking, it's more like 144.

After that little breather, I went back to the foundation-piecing
problem.  I did some tweaking and came up with more adequate
measurements for the pieces. 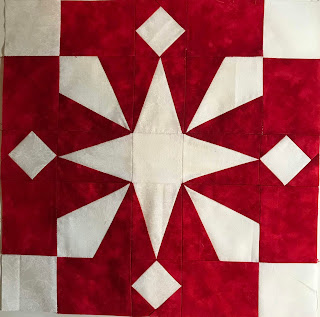 Here's where I guess I'll fess up.  I was so relieved when I put
the final pieces together!  Hallelujah.  Ah, that moment when you
enjoy the reveal of what you've been working on for hours!
Uh... 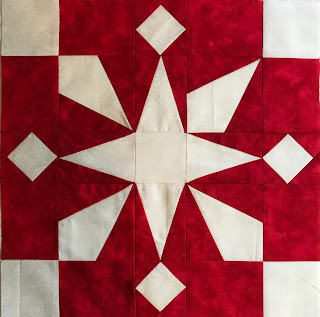 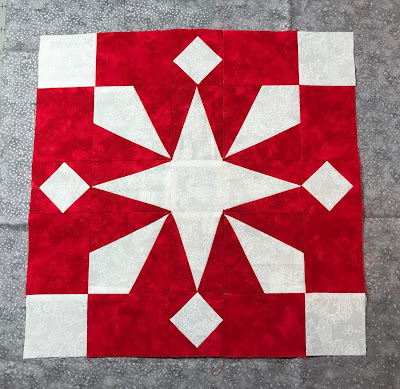 I don't usually make trial blocks because I want to jump
right in and get started but you know what?  If there ever
was a good time to do one, it was for this block.
It's pretty but...not pretty enough to do 12 times.
The pieces are a bit big and clumpy for me to feel a
delicate, soft snowflake.
Nope.  It's just not there.
By the way, we finally got some snow.
Not a big amount, and it mostly came
overnight but at least it didn't all melt this time.
So I'm wearing a sweater that says "Let It Snow!"

And back that painstakingly paper-pieced snowflake?
I've decided to just let it go.
Not only am I choosing a different block altogether,
I'm moving the entire project back--again.
But that's okay.
A few other quilts need to be finished first.

I like that red snowflake. It would make a nice mini quilt. It's snowing now, and we are expected to get 6-9 inches Sunday night into all day Monday. If I could, I'd happily send it your way.