Where has September gone?
Amazingly, we're already nearing the end of the Seeing Stars QAL
and today I'm sharing the last of my star blocks. 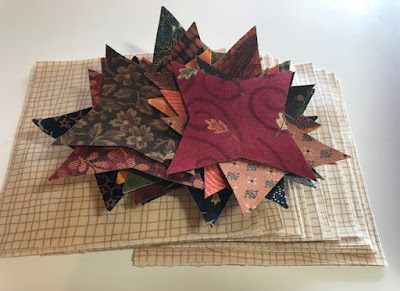 First, I want to share my thrifty version of making a template. 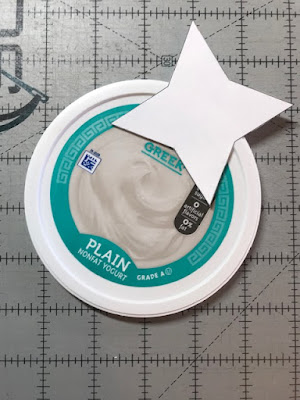 After printing the provided star pattern out on paper, I then
traced it on a lid from a quart-sized carton of yogurt.
I really do have template sheets but I've been saving them
for the Farmer's Wife quilt that I've been planning for, oh, something
like two or three years now.  That thing has a bajillion or so templates
which, now that I think of it, might be part of why I've been putting it off. 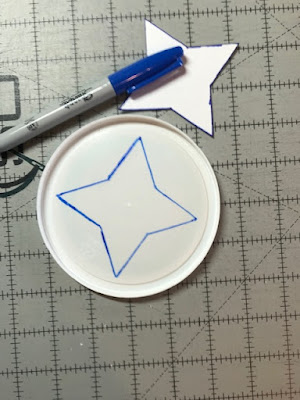 Anyhoo, let's say you don't have any on hand.  Or you, like me, would rather
spend your money on fabric.  Or maybe you, like me, have a personal rule to
try to get at least two or three uses out of everything...or something like that.
Then you'll want to go grab a lid. 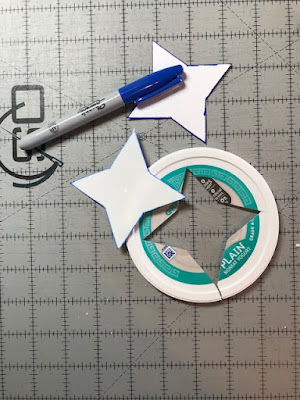 For the record, yes, I do still make my own yogurt but because
that means I'm making it once a week or so
[me + fruit smoothie for breakfast 6x's a week = lots of yogurt!]
I like to take a break every now and then,
especially during the holidays or other super-busy times.

Oy!  Now that we've discussed thrifty tricks,
the Farmer's Wife quilt and how much homemade
yogurt I go through in a week, let's get back to the stars...

Here they are, the last of my stars for the Seeing Stars QAL. I had everything cut out and ready to go last week but I waited.
And waited.  And waited for that phone call.  The one where
the shop calls and says my sewing machine is all good to go.
But they didn't call.  Ok, I was told "...about a week and a half"
and yesterday marked just a week.  Well gosh, a girl can hope!
A girl can also get some of her fall cleaning done with all that
waiting.  I now sew in front of a sparkling clean window. ;o)

I'm sure they will call tomorrow now that I'm all done.
But I'll take that.

How about a peak at the full quilt?
I just threw it out there so this isn't the final layout: 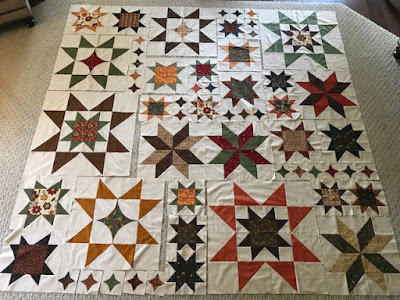 Posted by Cheree @ The Morning Latte at 6:15 PM

The stars and the quilt layout look fabulous. Well done.

Still no machine? I am at a lost on this. But I love your star designs. It is looking fabulous.

Your applique stars are so cute!!! Great job getting them all done. And what a great idea to use a plastic lid for a template!!!! I had never thought of that and it would be so perfect ;) Thanks for sharing ;) And eeekkk!!! I love seeing all of your stars laid out, this is going to be absolutely stunning!!!

It looks great! I've been so overloaded with projects that I haven't had time to do more than print out the patterns.