A Quick Trip to NY

When I said I'd be too busy to sew this past weekend,
I left out the little part about heading out to NY.
Okay, maybe not so little!
What a fast trip, and I'm still recovering but I thought
I'd throw out a few pics.  I have so many and some great
videos but I think I'll keep it to just these for now.

I can't say I've ever wanted to visit the city but it was nice to see
that fantastic and notorious skyline.  Above is the view from the
airport; we didn't actually go downtown but did see other areas
when we drove through on our way to our destination.
Someday we'll have to plan more time and actually get to see
Central Park and the Statue of Liberty. 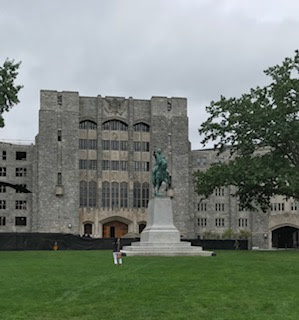 But this time, we headed up north.
What a contrast to the city!  It is such a beautiful area!
As a child growing up in KS, I never got the chance to take in any
of our country's earliest historical areas so my interest in history
came a little later in life when I started reading more about it.
Now history makes up the majority of my reading.

Last June we enjoyed a great visit to Boston where we took in such
sights as the Freedom Trail, Peacefield (John Adams' home), Cape Cod,
Sam Adams Brewery, a game at Fenway Park, Plymouth Rock and Salem. 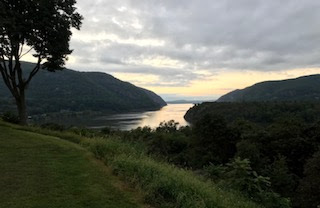 This weekend, we took the history lesson south to West Point,
the US Military Academy (USMA).
What a breathtaking view of the Hudson General Washington had! 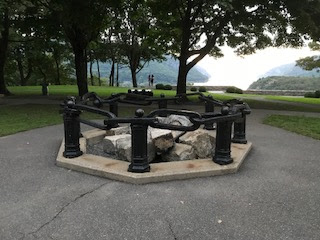 Links of the actual chain

Though most of the time I'm sure he had other things on his mind,
like putting that chain across the river to keep the Brits out. 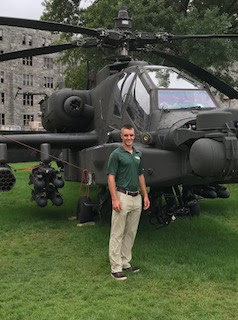 And, while this kid loves military history too,
he also had Blackhawks on his mind... 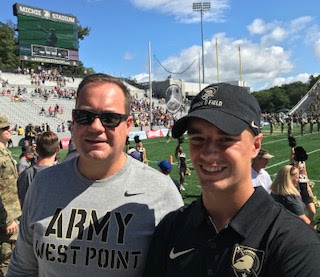 ...and we all enjoyed some football. 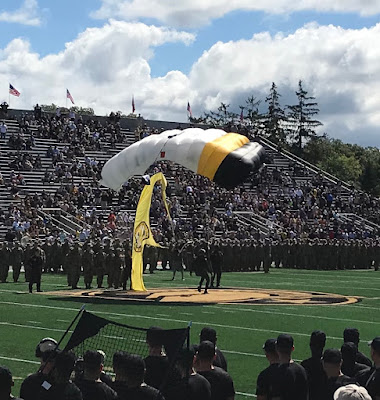 Before the game four parachuters jumped from 4500 feet to land
exactly in the middle of the Army's black knight logo on the field.
The fans were also treated to a flyover of three Blackhawks and
one chinook.  To finish, our Army beat Hawaii and then it was
off to the airport we went finally arriving home just before midnight
on Saturday.  What a whirlwind three days!

Now to get on the phone and deal with that sewing machine repair issue.
Not exactly what I expected to come home to but, life goes on.  LOL.
I do get to work with my long arm today so it's all good.  :o)

Posted by Cheree @ The Morning Latte at 9:09 AM