A combination of rough weather on the way
and feeling rough myself after yesterday's yard work
is going to keep me inside today...I hope.
Once I'm outside it's hard to stop.
With 3 acres there's always something that needs attention
and, in nice weather, I love it--no matter how hard the work.
Must be some farm girl still in me. 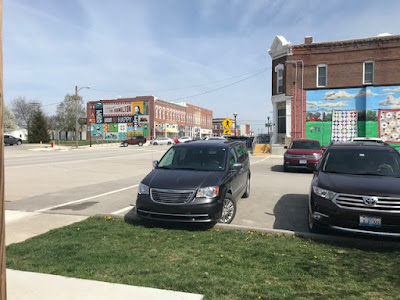 So last week, after my fun trip up to Missouri Star,
I made a trial run on the block for the quilt.
Having fully understood the assembly, the author's idea of a 1/4"
seam allowance and then achieving the correct finished block size, I....

You thought I was going to say "made a bunch of blocks" right?

My days lately have been a combo of:
(after my morning coffee routine)
work outside, force myself in to the sewing room for a little rest
and then head back out in the late afternoon till dinner.
It's weird for me to break the days up like this but it has
become a necessity.  I prefer to work on something till it's done but
I guess I'll get used to it eventually.
All part of my "slow down" New Year's resolution.

Back to fabric, quilts, sewing and such.
This grad is headed to K-State but I'm not sure I've ever seen
him wear purple--and I've known him most of his life.
I don't want the quilt to scream "I'm a freshman!" by putting
actual K-State fabric in it nor did I want it to have so much
purple that he wouldn't be able to use it years later.
So here's my chosen "palette". 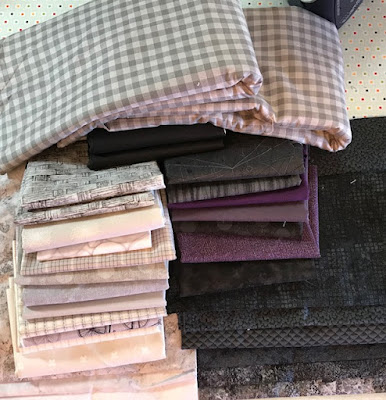 (The gray plaid is the backing.)

This guy is rather close to our hearts--he's been a good friend of my son's
since kindergarten and his parents have been close friends of ours
for almost as long.  He likes the outdoors and is an Eagle Scout.
So.....mountains maybe? 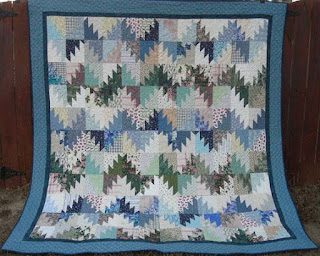 I think--I hope!--the delectable mountain pattern is something he
will like.  I've chosen to go with the above instructions though I'll
be altering it to fit a dorm twin XL bed.  I have no idea if he'll
use it in his dorm room but it will be an option at least.

I did get some HST's and just a handful of blocks made
over the next few days.  Not a full on "jump in"
but a "dip the toes in the water" kind of start.
The HST's are big--trimmed to 8" squares.
Each block in this case is a "half" of a mountain and measures 6.5" x 8". 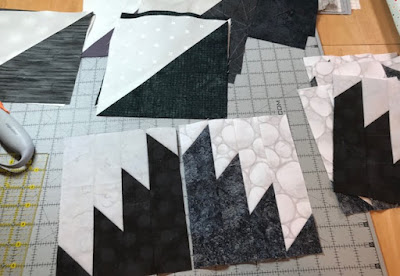 The construction is easy--half square triangles cut into strips
and re-arranged.  Just what the doctor ordered.
Maybe today  I'll "jump in the pool".

And speaking of, maybe we'll open our pool up this weekend!
Posted by Cheree @ The Morning Latte at 12:46 PM

Love this pattern and the palette looks great. I am sure he will like, enjoy , and be covered in love with this quilt.
Don't overdo outside.....you get further in the long run with slow steady pace. I am not good at it though:)

Those fabrics will make a great 'mountain' quilt. He'll love it for sure.