The End of the Growing Season

The first freeze is on the way so this week,
as much as I'd like to be in the sewing room,
I need to focus on the close of garden season.
Peppers, tomatoes (green and red!), pears and pumpkins.
Not to mention the herbs. 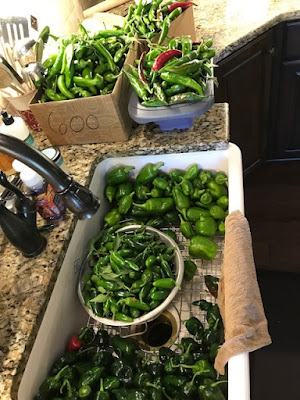 It's really a shame we don't have another month because
the great rains we've gotten this fall have kicked everything
in (finally!) and I now have what would be a bumper crop
of peppers.  As it is, many are only half-size and even more are
just blooms or too tiny to be worth my time. 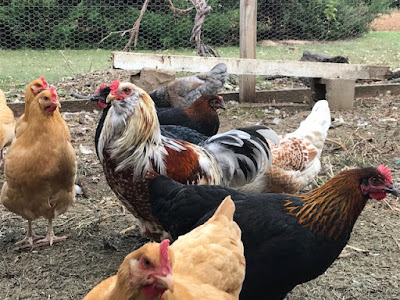 Igor, my "accidental" rooster that I didn't order but I love beautiful roosters
and he's very tame so far.  So tame I may change his name to Rupert.

But, as nothing goes to waste around here, the chickens were able
to pick through the pulled plants for snacks.  I've got more
than I can want to deal with right now anyway! 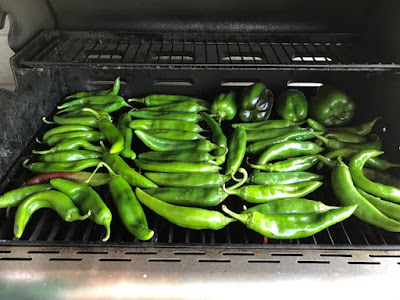 Just 1 of the 4 batches I grilled up.

Over the next few days I'll be making green enchilada sauce for
the freezer and canning up salsa verde so, as I type this,
I'm also roasting well over 100 Anaheim green chilies.
The pops and crackles and the smells of the peppers
cause me to be very thankful for what I have to work with.
Peeling all of those peppers is a tedious job but outside
a bluejay is claiming his space, the drying leaves are rustling
and the air is crisp.  It's a little hard to focus on the pears and the herbs
as well when the sewing room calls but I'll look instead on the colors and
take in the smells, and know what we'll enjoy in the coming winter.

I can't help but love Thanksgiving--it's smack in the middle of my favorite
season with its use of the harvest and colors.  But I really love it
because the message of stewardship and thankfulness
surrounds us in such a way that it cannot be avoided.
Life gets busy and the attitude of gratitude, no matter how hard
I try, sometimes slips a little.  In the fall, however, the scramble
and the hard work comes to a close and the rewards pile up so much
that they can't help but smack me in the face--sometimes literally even.
Like juice from a sizzling hot pepper.

On the note of gratefulness, I'm pretty thankful for Internet
after a week with none.  I found the hardest part to be lacking the
ability to access the printer.  I was really wanting to start on my
Farmer's Wife quilt but couldn't even print the templates.
I suppose it is just as well as there are enough other quilts to
finish first.  Instead I worked on the applique center of my fall quilt. 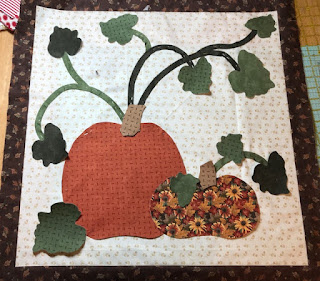 This isn't a favorite craft of mine but I do like how it fits into this
quilt so I thought I'd make an exception.  This is a "rough draft"
that I'm still working on--not quite happy with it yet.

For now, I have gloves to don and many peppers to seed and peel.
Posted by Cheree @ The Morning Latte at 1:14 PM