Everything is in safe from the freeze; now comes the struggle
of trying to get it all used fresh or preserved for later. 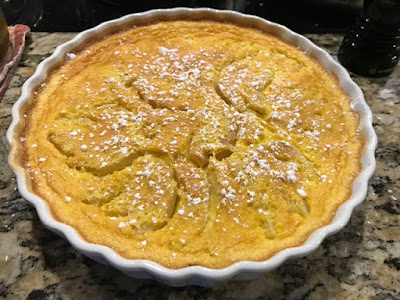 Using the recipe from Julia Child's French cookbook
(that I've made several times with black cherries),
I tried out some of our pears in a clafoutis.
Amazingly simple and so yummy, this summer
recipe has just been extended to the fall!
Recipe here. 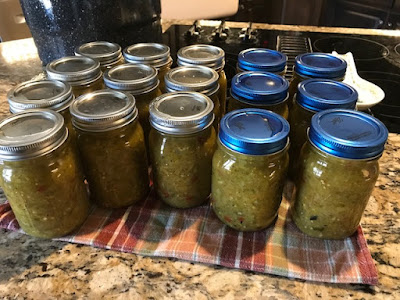 A portion of the roasted Anaheim chilies and green tomatoes became
16 pints of salsa verde.  (Using green tomatoes is a first for me;
but I didn't really get any tomatillos this year.)  Another portion went
to make 13 bags of enchilada sauce (freezer).  The remaining roasted
chilies went to the freezer but there are still piles of peppers and
my first crop of lemongrass to deal with in the fridge. 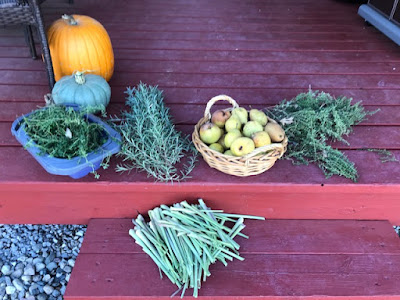 Over the late fall & winter, I store the extra pumpkins in the
garage--I cut them up as I get time over the next few months.
I've had pumpkins last to mid-February so why bother freezing
all the pumpkin puree when we can have it fresh? 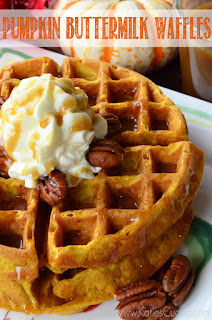 This very yummy recipe of Pumpkin Buttermilk Waffles hit our
table just this morning.  We all loved them but I did cut the spices
in half--when you make a lot of pumpkin recipes, the strong
flavor of these spices can get old quick.  Turned out to be a good
choice as I don't think I'd want more.  I also question all the butter.
I'll cut some next time but I'm a little concerned that may alter the texture.
And we like our waffles to be a little crispy.  Either way, these are
very worth trying but be warned they are rich with fall flavors.
(And calories?!) 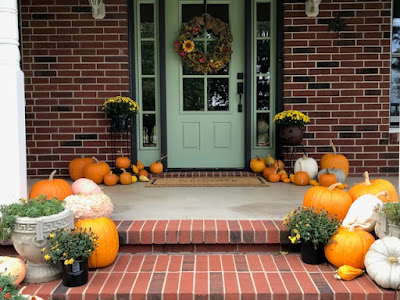 My fall display on our front porch has been breakfast, lunch and
dinner for someone.  Fortunately, he only hit the gourds up there
but when I went to get the pumpkins out of the old wheelbarrow
that I use to display even more produce in the flower garden,
I found he had done some real damage. 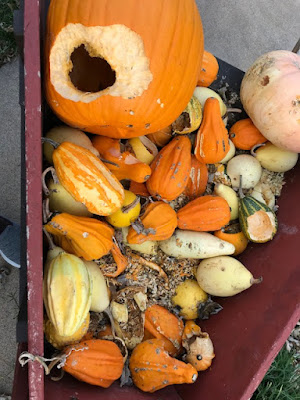 I decided my only option was to tear down most of my fall display early,
or I'd risk losing a good portion of my pumpkin crop.
So, leaving what I don't cook with, I set to work loading up everything else.
But I soon discovered the criminal was still at the scene of the crime
inside the above pumpkin--a very large field mouse.  After what all he'd
been eating, I was not surprised.  But I was mad, and I will just say that he
will no longer be damaging anything on my front porch or anywhere else.
Mice are a given around here but lately they seem to be out of control.
I'm grateful the cats always keep them out of the house but something
has got to be done outside.  They live under the chicken coop.  Almost any
walk into the garden among the vines you'll see at least one and hear
another scurrying.  Traps and poison are out of the question with the
cats on patrol--and yes, they do catch them.
More cats are out of the question as well.

Onto more pleasant topics...
My second go at the long-arm went a lot better.  No tension issues!
I did have to learn how to load each layer (remember the first quilt
was already basted).  I've watched so many videos but I have yet
to see one that explained the direction of each roll/lead attachment
so I'm a little fuzzy here. 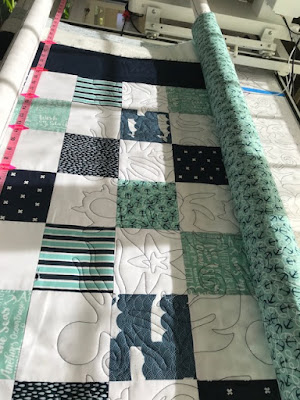 I still find these sea creatures to be very difficult
but I'm pretty sure they aren't perfect in the ocean
so why worry about it? 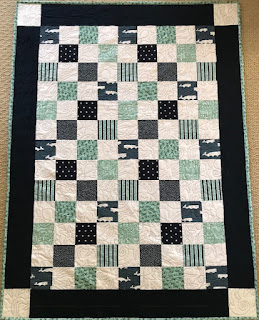 I have the binding sewn on from the front but I'm saving
the hand-sewing on the back for either tonight while we
watch football or for the upcoming road-trip
to see our new grandson...whenever he gets here.

Well, you have sure been busy in the kitchen and it all looks yummy! We finally got tired of the field mice damage and Russ put out some new traps baited with peanut butter. I think he has been successful in the garage too.
So glad the LA learning is going better.....sorry no advice on the directions of the rolls. I never figured that out either:)

We are dealing with mice, for the first time. They are making nests in our gas grill, and getting into things. Hubby has been putting out mice bait, and they have been eating enough to kill a whole bunch of colonies of mice. Still, the bait keeps disappearing. We only have dogs, so, more places we can put the bait, and not have the dogs able to get to it.