What Fuels Our Creative Passion Part 4: A Question of Time

warning:  buried anger issues may be found at random points in this post!
I recently read the some of the best 9 pages of writing ever--and I've done quite a bit of reading.  It probably won't become classic literature but it made me want to jump up and down and yell, "YES!"  So, I forced my husband to listen to it as I re-read it.  (He was greatly amused and nodded agree-ingly quite often)  Then I wanted to run out and grab people off the street to tell them about it.  (Probably a good thing I didn't...)  I also wanted to make a list of people that I thought really needed to hear it. (Probably not a positive/healthy move at the dawn of a new year...)
I know.  You're on the edge of your seat, aren't you?  Well, if you're a knitter you've probably already read it.  If you quilt, sew or have some other hobby involving a fascination with fabric, go buy it--or get it at the library--and just insert "fabric" where it says "yarn".  It's just as funny.  I promise you.  I'm talking about Stephanie Pearl- McPhee's latest book, All Wound Up. 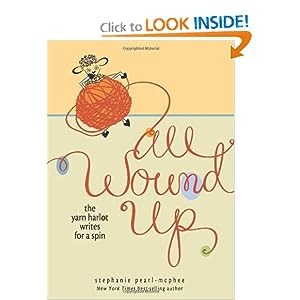 (image: Amazon)
If there is one comment that sets me off it's the one about my time.  The one that insinuates I must have nothing better to do.  The one that says to me "I'm sooo much busier [aka, more important] than you that I could never waste my time doing that."   So, you can imagine my immense excitement when I read the first chapter of Stephanie's book.  Hopefully this doesn't get me into some sort of trouble but I have to tell you about it.  She starts it out explaining how she passed time in a waiting room, knitting happily away while the woman next to her, mindlessly thumbing through waiting-room-quality magazines, worked herself into a lovely, and completely unproductive, frazzled fit...which ultimately led to a conversation that ended in that comment.
Stephanie poses a great question:  "How did doing something productive become a symbol of having idle time, while being idle is seen as having no time?"  Oh, bravo!  "In no time at all, we've managed to become such a consumeristic, product-driven society that people have stopped thinking that it's a waste to buy something you could make yourself and started thinking that it's wasteful to make something that you could be buying."  She sums this crazy attitude up in a mind-boggling (at least to us crafters) sentence:  "I don't want to waste time making mittens;  I want to spend time buying them." bhg
Do you know the average person spends four hours a day in front of the tv?  (Yet one more reason I love not being "average"!)  What could be done in four hours a day--oy, it hurts my head!!!  I'd venture to say that most truly creative people spend less than half that time watching television.  I don't usually spend 4 hours a week in front of it but when I am there, I have something--knitting, quilting, etc--in my hands.   The watching of television--while sitting as "inert as dirt"--has become a completely normalized activity while knitting--which, by the way, uses both sides of your brain and is obviously productive--is an indicator of having time or even wasting time.  Stephanie, you have put into words the confusion and frustration that's been going on in my brain for many years!

Us creative types, we create.  And if we aren't finding enough time to create, then, by golly, we create time.   It's all about how passionate and determined you are in your craft.  We are just as busy as the next person.  We just happen to be very good at fitting more into our day--and at taking out those occupations that are worthless and unproductive.  Us creative types are also sneaky little multitaskers.  Just yesterday, we took the kids bowling.  Between turns, my hands were making a scarf.    What am I doing while waiting on the kids at after school pick-up?  When in a waiting room?  Yup.  See?  It's like that.

In the last portion of her first chapter, Stephanie finally just muses that maybe "I don't have time" is a defense--some are just trying to "justify their own slacker ways."   I have to admit, in finding such a kindred spirit who has such kindred thoughts, I completey indulged myself in a resounding, "A HA!  I THOUGHT SO!  HA HA!"  No, probably not that "new-year positive and healthy attitude" that I mentioned earlier but please, oh, please.  PLEASE let us creative people have our moment!  After all, we've had to put up with others looking down their too-busy noses at us for years.  Meanwhile, look at all we've accomplished right under their noses and they are just missing out on it all.

I don't mean to sound bitter at all--I'm not really.  But, Stephanie, thank you soooo much for starting my year out this way!  For letting me know I'm actually pretty sane.  That I'm not alone.  And for giving me the boost that I needed to go at it even stronger than before!
Happy 2012 to all of my wonderful new blogger friends!
May you create to your heart's content!!
Part I
Part II
Part III
Posted by Cheree @ The Morning Latte at 8:19 AM

Email ThisBlogThis!Share to TwitterShare to FacebookShare to Pinterest
Labels: creativity

I just may have to pick up that book! Strangely enough, I had a conversation about this with one of my co-workers yesterday. She seemed bewildered at my response that I get some of my crafting done after dinner every night. I completely agree that turning off the TV is the key to doing the things that you want to do instead of getting sucked in for hours on end.

Absolutely on the mark. Every bit of it. Once I received a comment about one of my watercolor quilts that went like this...."Whoa, someone has too much time on her hands." How is that for a slap! I just went on and made another one, and another one....and so on.
TV time is wasted unless I am piecing or being creative. Thanks for the insights.

Hello! I have just come across your blog and I love it! Thanks so much for taking the time to share!

Have yourself a great day...and stop by to visit with me too if you like, my 'screen' door is always open to creative types.

Don't you love how her mind works? She is always a breath of fresh air for me... she 'says' what I think and sometimes (though rarely) am afraid to say. I'm so glad that you are enjoying her book - one that I fear I have yet to pick up but it's on my list.

Bwahaha, love it! I must be the sort of person that scares people easily as my colleagues actually bring me things to sew and mend, while being terribly appreciative lol I have, however, come across the insinuation from other crafters that I'm doing too much - you can never win! But with no family or pets or anyone to answer to but myself when I get home, I can pretty much do as I please, and it pleases me to craft (in front of the telly usually though lol)

So well put - I must get this book. I agree with you 100% - I am not a tv watcher - I do not average an hour a week! I have always felt it was a time waster - I would rather have my hands busy crocheting or sewing than watching TV (I really feel most of what is on TV is junk anyway!). We all need some "me" time everyday and my crochet or sewing time is my "me" time. Thanks for this post - it really hit home with me!

Very well put, Cheree! Love this post. I'll be keeping my out for that book!