What Fuels Our Creative Passions, Part I

I've ogled quilts and knitting needles for as long as I can remember.  At a young age, I learned just a few basics of sewing but it was enough for me to "damn the torpedoes" and run full speed ahead on my own.  This may not be the most efficient or even the most enjoyable way to learn but there is an awful lot to be said for learning from one's mistakes.  I regret nothing.  Except that I didn't try quilting sooner. 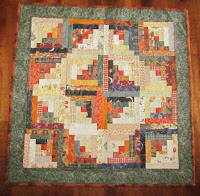 Obviously, the appeal of sewing one's own clothes is pretty strong to a young teen so I went off in that direction.  It wasn't until I was pregnant with my third child that something clicked and I decided "now is as good a time as any," and off I went.   As with sewing, I pretty much taught myself but, unlike sewing, I think I have many gaps that only others' knowledge and experiences can fill.  Twelve years later, I feel I'm just at an "average" level.  I think if I really challenged myself, I could go farther but I don't exactly have all the free-time that I once had as a teenager.  I do enjoy quilting very much and still tear through--and up--my fabric stash with more fervor than one of our Kansas tornadoes when the fever of a new project infects me.   As far as fabric stashes go, I keep myself fairly "in check" compared to most, but still, it is a stash of which I need not be ashamed.  Each fall, I venture out, slightly less "in check", on my favorite quilt shop hop.  Fabric is, and always will be, one of my true loves.

Before I learned to sew, I picked up a tiny crochet hook that came from I know not where.  No one of my acquaintance knew--or at the very least remembered--how to use it so I tried the library.  I can be the most determined person I know when I get a notion to learn a new craft but this one had me stumped.  I had to stop at the chain.  I could go no farther, no matter how much I tried.  And I tried a lot.  Especially for a seven year-old.  I wondered if knitting was easier but  "I know not where" hadn't provided me with any of those so I tried to push that thought away.
About 7 years later, I came into possession of a huge box of yarn and knitting needles.   Well, that was like Christmas.  In retrospect, I see that the yarn was all very simple in quality and most knitters wouldn't bother to put a needle to it but at the time, all I saw there in that box were scarves, sweaters, blankets--my mind ran wild every time I looked at it!  But, like crochet, I couldn't seem to get it.  And, besides, I had all those clothes to sew.  Still, I dragged that box with me to several different homes and, though I eventually weeded out most of the yarn, I kept the needles--some very odd-looking-- and other sorts of little important-looking bits and bobs that came with it.

Several years ago I was hit with another "now or never" moment.  This time I sought an authority.  Goodness, all I had needed was to be shown how to knit!  Sometimes all the books and videos of the world can NOT do what another physically present human can do!   (All of you frustrated wannabe knitters out there, please pay heed to that!)  And if you've had any time this holiday season to keep up on my posts, you'll see that I've recently graduated past the scarf and moved on to the hat.  And DPN's.  That's right.  I can say it with pride now because not only do I know what it stands for, I know how to use them.   Laugh away, you seasoned knitters.  I can't hear through my computer anyway.  Only my hands know exactly what it took to get those two measly little hats completed.  And I don't care if there is a very visible mistake on the first one--neither does my son who got it for Christmas. 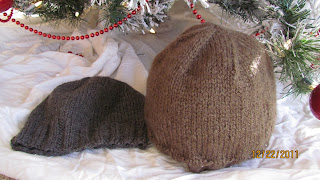 Both of my boys are so amazed, excited and proud when I make something that it floors me.   Firstly, that boys could even be interested, and second, that in today's world these boys, at such young ages, can actually appreciate a hand made gift.  Ya gotta love 'em.   Aside from the Faith, if there is anything I've taught my 4 children,  I hope it's that appreciation of that kind of time and effort put into a gift that sticks with them.   The best part of hand-crafting something is giving it away but seeing it received with equal love is what truly touches our hearts,  gives us peace and inspires us to do more.   Couldn't the world use a little more of that?

Linked to:
Hodgepodge Friday
Posted by Cheree @ The Morning Latte at 11:11 PM

Great story to discover your passion and love....fiber and creation. I first learned to crochet and then sewing took over. And forget the mistakes --in the cap---it is the love that passed from you heart to your hands that gives life to the fibers.

Its wonderful to learn a new craft isnt it? Hope you graduate to socks soon! They are just a hat on a smaller scale with a heel.

Aww, so glad you were able to learn how to knit. Waaaay back my mum showed me how to knit, with best quality acrylic (as I'm allergic to wool) but I doubt I could do it now if you paid me! At the time I couldn't really see the point (I think I was about 7, climbing trees held more appeal ;o) ) and although I know now you can get really nice cotton and bamboo yarn, I know if I try to start, I'll get totally sucked in to something else, and I don't have time!