I'm one of those customers.
You know, there in the car waiting till the door is unlocked.
So, bright and early--er, sort of...
(well, it doesn't open till 10 am--if it had opened at 7 am, I probably
would've been there "bright and early".)
I walked into the quilt shop, coffee in hand.
Knowing better, I set my coffee on the top of a shelf
of a beautiful display of reds and went to work.
(you know where this is going, don't you?)

photo credit
Yes, normally I would set my coffee on the floor,
being respectful of the fabric around me.  I had no way
of knowing that display boards can randomly jump out
from top shelves and attack customers, thus creating a
domino effect down the top shelf and eventually hitting
my cup of coffee that I had at least set way out of the
way--or so I thought.   After all of this had unfolded in
sloooow motion, I pretty much just wanted to crawl
into a hole bolt.  But, the employee rounded the corner
just then, put two-and-two together and insisted it was
not my fault.  The board should have been tacked down.
They don't like "divers" in their shop, she said.
(So, there's even a name for this agressive species!)
Well, very little fabric was damaged.  And I even offered
to buy that peice.  I know--highly considerate of me to
offer to buy some fabric!
(why, yes I did make sure I liked it before offering...) 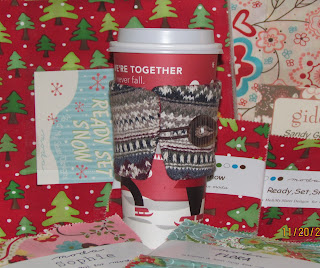 Here's the culprit--sitting atop more fabric.
I guess you could say this is his "mug" shot.
Sorry...
Random:  Like the cozy?  Made it from an old favorite
sweater last year--get lots of compliments on that.
Well, the good news is that I have my red that I was after
and I can get right to work on finishing A Very Merry.
Even with all that had happened, the shop employee was
super-helpful and I think what I have will work beautifully.
Meanwhile back at home....
My boys were having a little fun of their own.
Meet Fezziwig, our "cockatiel from heaven".
(seriously, he just appeared on our front porch one day and we couldn't leave him there.
I don't even like animals in my house!  And yet, I have a cat, a bird, some fish, a turtle...
At least the chickens are outside!!  Now, where was I?) 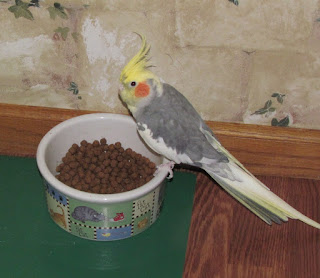 The boys got him out for a "stretch of the wings" and look
where he hopped up onto?  The cat's food dish.
This picture just appeared on my camera.
Good to know my boys have a thriving sense of humor...
Posted by Cheree @ The Morning Latte at 11:44 AM

I can see that the joy just spills over around you!!

How kind of the staff to be so understanding.

Was your face as red as the fabric you were buying??

Wow, that's probably the most excitement they will have all day :) We had a cockatiel, it used to LOVE to land on the edge of our cereal bowl..and eat the cereal of course.. It also love to sit on the blades of the ceiling fan, I loved that bird :) It's weird because I was just thinking about him earlier today. And your ziti sounds amazing!

ROFLMAO. Sorry, that was mean, but really, that was funny, both coffee-gate and the cat's morning snack...

This sounds like something I would do - lucky for you that the staff was understanding. I do not think that this would always be the case! Enjoy your new birdie friend!

We found our one cat under a car at a restaurant. No one was around and he was skinny, smelt like gasoline and had fleas so of course we took him home, cleaned him up and kept him. Best mouser we have ever had! Good to know I'm not the only softee out there LOL.

Oh I can hear your pain!! What an embarassing moment. That is my greatest fear in a fabric shop. Luckily the staff were nice.

Thanks for sharing.
Debra