This morning I'm sharing another apple dessert.
Tis the season and all.
(so much for keeping desserts to a minimum!)
This is from one of my favorite recipe sources,
Closet Cooking. 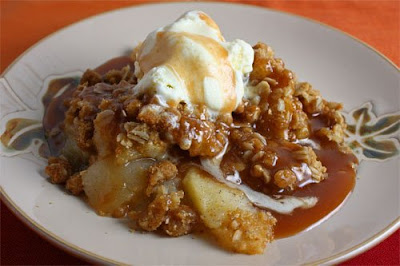 If you think of crisps as being a little ho-hum,
this one will change your mind.
Is the difference here the vanilla? 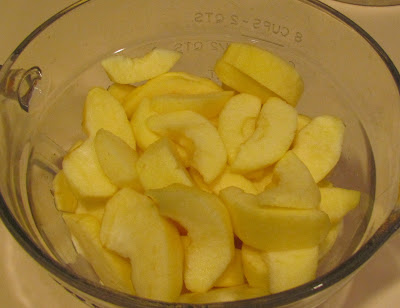 I didn't use the bean as the recipe states--
didn't have one on hand.
Instead, I just poured real vanilla
(a relative gets it for me in Mexico--lucky me!)
over the apples with the lemon juice. 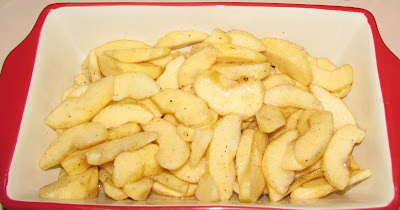 Or maybe I just have some really good apples?
Or is it the nutmeg?  I [heart] me some nutmeg.
Anyway, this apple crisp has made it's way into
our family cookbook.  Trust me--it's an honor.
[wink] [grin]
Bonuses:  Wonderfully quick & easy.
And you only dirty a few dishes in the
preparation process!

Unless you're rushing around to have it done
by the time the kiddos get home from school
(because you were playing too long on the computer)
and you do something lame,
(because you fried your brain on the computer)
without thinking,
(ok, well duh! Who would do something lame with thinking?)
like put the unneeded portion of butter in the
microwave to be melted while putting the
pre-measured, needed butter amount
(which was in a nice BOWL!)
back in the fridge and ended up
with this little mess. 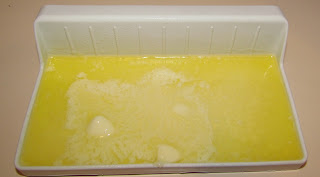 Well, you've got to keep your humor while
working in the kitchen, I say...
As you pull your crisp out of the oven, you'll notice
the house is really smelling nice.
Take a moment to admire at your work--
but strive to keep some sense of humility.
(not hard with the butter incident, right?) 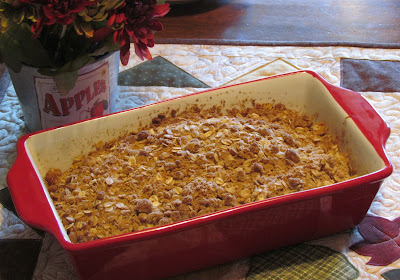 Oh, yeeeeaaah.
Wait--something is missing.
Lookin' a leeetle dry there... 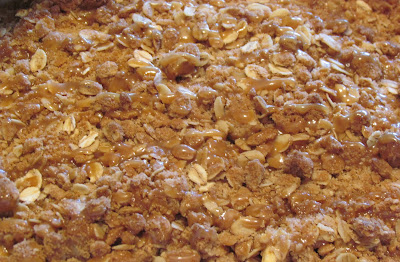 Mhm.  There it is!
Drizzle just a touch of caramel over the top. 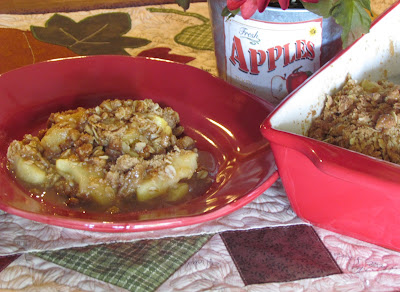 Generally, I like to leave off toppings and such
(like the icecream and the over-abundance of caramel pictured
with the recipe--clearly Kevin has a metabolism I can only dream of)
because I think it takes away from the flavor.
I want to taste freshness.  I'm often a minimalist.
However, a slight drizzle of caramel sure added to
the appearance--as I said, I thought it looked
a little dry, tho it sure wasn't underneath!
I'm kind of cheating today and just posting
the link for Vanilla Apple Crisp.
Eh....sue me.

I don't know the author of this blog, but I
believe that, when it comes to cooking, Kevin
and I just might be kindred kitchen spirits.
(I [heart] me some Anne of Green Gables, too!)
I've loved every single recipe of his that I've tried.
We have similar cooking skillz but he'll
occasionally throw in something new,
whether it be an ingredient or method.
And I like that.
Always up for trying new things.
It's all about personal growth.
(okay, when talking food, maybe growth isn't exactly what I'm after!)﻿
Hope you're enjoying the fruits of the season!
Posted by Cheree @ The Morning Latte at 12:01 AM

Email ThisBlogThis!Share to TwitterShare to FacebookShare to Pinterest
Labels: Mix It Up Monday